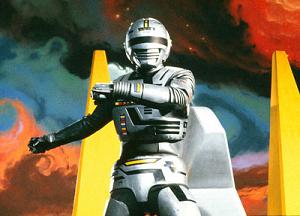 The one that started it all.

Sometime in the not so distant future, Earth is invaded by the evil Don Horror and his Makuu Empire. Rather than simply cause The End of the World as We Know It, Horror wishes to cause fear and panic amongst the populace, as well as steal every valuable his mooks can get their hands on. To thwart them, Space Sheriff Gavan of the Galactic Union Patrol arrives on Earth. Under the guise of Retsu Ichijōji, Gavan and his sidekick Mimi fight the never ending battle against evil.