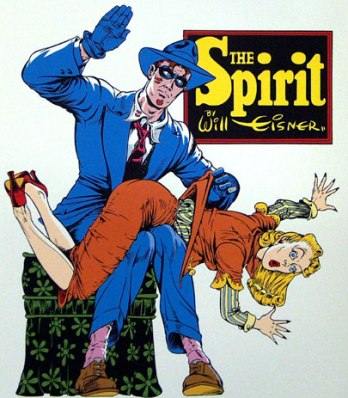 Being a sexy dame with a questionable moral compass... that's a paddlin'.

Someone, usually a female, just said or did something stupid, kinky or childish, and someone else, usually male, has to correct and punish them. However, instead of doing it with words or with a Dope Slap he suddenly gives her a good, old-fashioned spanking, a controversial parenting technique and a comedy goldmine. Hilarity Ensues. Most of the time Fetish Fuel also ensues. Often used for Fan Service.

Bonus points earned by different ways, such as:

A Sister Trope to Don't Make Me Take My Belt Off, a subtrope of Corporal Punishment and (sometimes) Cool and Unusual Punishment.

Happens quite often to Enfants Terribles and Bratty Half Pints.

Despite the name, not at all related to Breaking or Corrupting the Cutie. Or to spanking anything else, though that may happen as a result.

No real life examples, please; We don't care about your private life.

Examples of Spank the Cutie include: