Everything About Fiction You Never Wanted to Know.
(Redirected from Spider-Man Edge of Time)
Jump to navigation Jump to search 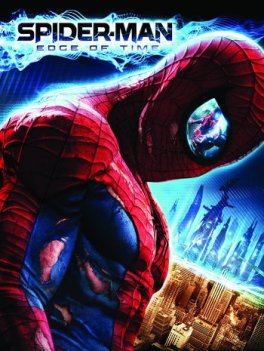 "This could be the end of Spider-Man."

Spider-Man: Edge of Time is a 2011 video game made by Beenox and published by Activision, and is the second game produced by the studios to be based on the Marvel Comics character Spider-Man (following on from their work on Spider-Man: Shattered Dimensions). In the game, players control both the Amazing Spider-Man and Spider-Man 2099 in two connected timelines that follow the untimely death of Peter Parker. It will feature all-new 'cause-and-effect' gameplay, where choices and actions can have unintended outcomes on the Spider-Man in the opposite timeline, and a storyline written by Peter David, co-creator of Spider-Man 2099.

The plot kicks off when evil Alchemax scientist Walker Sloan travels back to modern-day New York and uses his future tech to found Alchemax decades ahead of time. This causes Alchemax to become an even-more mega Mega Corp which has managed to Take Over the World. Spidey 2099, having gained wind of this plot, learns that a key factor is the death of Amazing Spidey and devises a way to communicate with Amazing Spider-Man to help stop Sloan.

Tropes used in Spider-Man: Edge of Time include:
Retrieved from "https://allthetropes.org/w/index.php?title=Spider-Man:_Edge_of_Time&oldid=1693385"
Categories:
Cookies help us deliver our services. By using our services, you agree to our use of cookies.