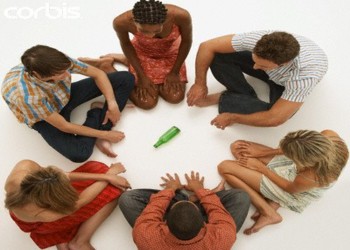 Spin the Bottle is a popular Party Game amongst older kids. It's essentially a Parlor Game that requires a bottle.

Get all your friends in a circle, place a bottle on its side in the center of the circle, and go round-robin in spinning the bottle (a la Wheel of Fortune). In the game's most basic version, you must smooch on the lips whoever the bottle points to when it comes to rest. Individual House Rules can determine who you can and cannot kiss (e.g. whether and which same-sex kisses are required, whether one has to kiss one's brother, sister, or other relation, etc., etc.), what the penalty is for not kissing a spun person, and other actions you can take.

Naturally, because of the comedic or dramatic potential that this game entices, it crops up in fiction every now and then, especially if said fiction has teenagers or other young people. It normally shows up as a source of anxiety for a teenage protagonist, faced with the prospect of kissing others.

Not to be confused with the production company that made Pop Up Video.

Examples of Spin the Bottle include:

Retrieved from "https://allthetropes.org/w/index.php?title=Spin_the_Bottle&oldid=1442641"
Categories:
Cookies help us deliver our services. By using our services, you agree to our use of cookies.