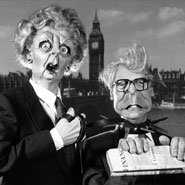 Spitting Image was a British satirical puppet show which ran on ITV from 1984 to 1996. It was produced by Spitting Image Productions for Central. The series was nominated for 10 BAFTA Awards, winning only one, for editing, in 1989.

It could possibly be one of the most influential shows in British television history. By virtue of using puppets they could get away with things that other shows could not.

For the entirety of the show's run, Britain was ruled by the Conservative Party, so the government (and especially Margaret Thatcher) was the show's favourite target. However, it did not spare the opposition parties, or other countries' leaders, or celebrities outside politics. Probably the most acerbically targeted country was apartheid South Africa.

The show ultimately ended due to the fact that they couldn't afford the new puppets they would need for a change of government; that, and the relatively bland composition of the John Major government, which lacked the epic grandeur of the Thatcher years and - with the notable exception of Major himself - almost defied satire. Budgetary reasons make a revival too expensive.

The show has had several Spiritual Successors such as the traditional animation 2DTV and CGI Headcases, but none have ever matched its popularity. The concept was brought overseas and foreign remakes have been made in France, the USA, India, Russia and Israel among others, with varying degrees of popularity--some bombed, others have outlasted the British original.

The show's team is also responsible for the famous video for "Land of Confusion" by Genesis, which features puppets of noted personalities (and the three members of the band) similar to those featured on the show.

Tropes used in Spitting Image include:
Retrieved from "https://allthetropes.org/w/index.php?title=Spitting_Image&oldid=1740578"
Categories: