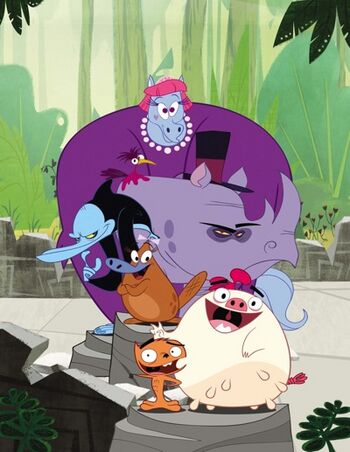 It's no ordinary island; do we have to say it twice?


Reinvented in the bowels of a lab..."
—The first lines of the show's Expository Theme Tune

A Canadian animated television series created by Simon Racioppa and Richard Elliott for Nelvana and Teletoon. It could be seen on Qubo in the United States, Disney XD in Mexico, Brazil & Spain, Nickelodeon in Sweden, ABC 3 in Australia, Nicktoons in UK & Ireland, and Teletoon in Canada. It first aired in 2009-2010

Once upon a time, there once lived a Mad Scientist who spent his weary days on a secluded island in the middle of the Pacific. To occupy his time, he creates biological abominations that stood against all notions of sanity and common sense. But sadly, it was only a matter of time until the judicial system caught whiff of the whole situation and arrested him for crimes against nature and "good taste". With their master forever gone from their lives, the mutants, with only limited knowledge of the outside world and their customs, are left to construct a civilization of their own. Of course, this leads to ensuing hilarity.

See the character sheet for more.

You can watch all episodes here.

Tropes used in Spliced include:

Wingus: I was offered a choice. Remove you [Two Legs Joe], or be banished.
Entrée: So what'cha do? Did you pull'em off?

Entrée: Hey Peri? Have you tried being Orange again?

Peri: "This is great! I hate it when I blink during movies."

Entrée: Have fun!, but not too much fun.

Peri: I keep telling you Retread! I lead, you FOLLOW!

Entrée: Hey guy, have you seen our red fire truck?

Narrator: To avoid damage to young minds, we've been ordered to replace this fight scene with happy puppies!