Everything About Fiction You Never Wanted to Know.
< SpongeBob SquarePants
Jump to navigation Jump to search

Characters from SpongeBob SquarePants include: 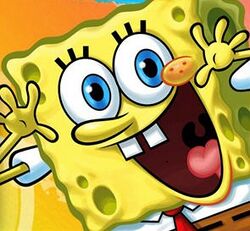 An outgoing sea sponge who lives in a pineapple under the sea, as the show's Theme Tune implies. Works as a fry cook at the Krusty Krab. Although not very bright, he has a good heart and constantly strives to help his friends...even when they don't really want it.

A not-quite-bright starfish who is SpongeBob's best friend.

A cranky perfectionist octopus who works as a cashier at the Krusty Krab. 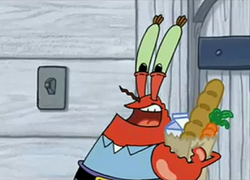 A scheming skinflint crustacean and owner of the Krusty Krab. His over-the-top greed and cheapness is played for laughs.

Krabs' business rival and arch-enemy. Is always after the formula for the Krabby Patty, the burger that SpongeBob fries up to the customers. Barring that, he ultimately aims for crushing all of Bikini Bottom beneath his feet.

A talking supercomputer who is Plankton's sidekick and wife. She provides him with evil plans to steal the Krabby Patty formula.

An athlete/scientist squirrel from Texas.

SpongeBob's patient but paranoid teacher at boating school, who is a pufferfish.

Mr. Krabs' beloved teenage daughter, who is a sperm whale.

Squidward's rival from high school. Squilliam is essentially everything Squidward dreamed of being. Whereas Squidward is a middleclass jackass stuck in a deadend job and considered a joke by everyone except SpongeBob and Patrick, Squilliam is a successful, filthy stinking rich jackass beloved by all. He loves rubbing his success in Squidward's face.

SpongeBob and Patrick's creation, a crude doodle of SpongeBob come to life, and on an Unstoppable Rage.

An undead surfer fish who appears mostly in the background, but has some major roles.

Retrieved from "https://allthetropes.org/w/index.php?title=SpongeBob_SquarePants/Characters&oldid=1920795"
Categories:
Cookies help us deliver our services. By using our services, you agree to our use of cookies.