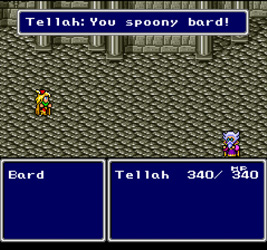 Ah, the much-maligned bard class... For some reason, bards are very frequently unable to ever become anything useful. They are the butt of jokes, they are often beaten by old men with canes, and sometimes their friends use a mountain of bard corpses as convenient cover.

If you have any experience with your typical fantasy RPG whatsoever, you know the basic roles by heart. RPG games are made so that characters are specialized, but rather than crippling characters for their specialization, they are actually more powerful the more they specialize thanks to the fact that party members can rely on their comrades-in-arms whenever the challenge the heroes face plays to one party member's weakness, it will be playing to another party member's strength.

But then, while the dedicated RPG gamers will always beeline for the characters with the best damage-dealing potential or who do the best in their party role, if only because they are so ingrained into the minds of RPG players that they would reject anything else, many game makers also want to cater to players who want to see something a little different, and which makes the game something more than just a matter of the same four basic characters. Even when there are other classes, they really only fill the same roles that those major four pillars of RPG-dom dictate, but with an added gimmick.

Enter the bard! (or sometimes "dancer" or "cheerleader") For some reason, when game makers want more splats, bards are the way that everyone tries to make their game "different." Bards provide an entirely new role that falls outside of those standard four roles, which lets players who want to try something different have a way to support the party in a way that is (questionably) new and (possibly) unique.

It rarely works as intended. Bards usually become spoony when they run into one of two major problems:

It is worth noting that oftentimes, bard-type characters are Spoony Bards because the game makers simply didn't think things through when they made the class and didn't do proper balancing. Typically, when a class is "weak and worthless," especially in MMORPGs, other classes will be nerfed, or the bards will get additional beneficial gimmicks to make them useful and avoid an inevitable revolt by the players.

On the other hand not everyone plays just for the thrill of the kill and some gamers want to avoid Complacent Gaming Syndrome, so the ability to play with a "fun" mechanic or to try something new is sometimes worth the loss of effectiveness.

The term "Spoony Bard" itself, incidentally, comes from Final Fantasy IV - it was originally used as a Woolseyism insult at Edward (a bard), but so many fans of the game saw him as a useless waste of a party slot, thanks to being a status-effect character in a Useless Useful Spell game, and even worse, having the command "Hide" that does Exactly What It Says on the Tin, (making him not just weak, but a Dirty Coward to boot,) that the players themselves took up the amusing insult to Edward, and the bard class in general.

Keep in mind that simply having a "Bard" class is not sufficient - they have to be spoony bards - that is, if bards are powerful and useful, and virtually all parties will want one, then they aren't really a spoony bard. If a bard is a generalist with magic, but is actually powerful at spellcasting, they may instead be The Red Mage. Also, the class doesn't have to have anything to do with music or bards to be a spoony bard, they simply have to try to perform the same function that most spoony bards do, which is messing with status effects in a game where status effects are useless or giving ability point bonuses or penalties that are too minor to make up for not simply making another fighter.

See also What Kind of Lame Power Is Heart, Anyway? and Master of None. Contrast Game Breaker, Lethal Joke Character, and the occasional Heart Is an Awesome Power.

Not to be confused with a different Spoony (though he got his name from the Trope Namer), or the midwest-based music group, The Spoony Bards.

Not to be confused with Funny Spoon.

Examples of Spoony Bard include:

Retrieved from "https://allthetropes.org/w/index.php?title=Spoony_Bard&oldid=1825976"
Categories:
Cookies help us deliver our services. By using our services, you agree to our use of cookies.