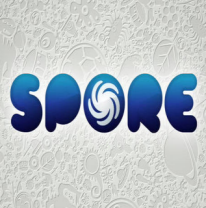 The Spore video game franchise is, at its broadest, an "evolutionary simulator" in which you guide the development of a species from its humble beginnings as a single-celled organism in a tidepool to its ultimate destiny as a spacefaring empire capable of conquering (or destroying) other planets.

The idea was first conceived by Will Wright not long after The Sims was finished; he had made a game about people, so he wanted to make a game about "everything else" next -- and the game's development schedule took eight years to finish.

Almost all content seen in Spore was developed by its userbase, thanks to the game's ability to automatically upload creations (from cells and creatures to vehicles and spacecraft) to the main Spore website ("Sporepedia"), and subsequently download those creations to other games. For example, while about 1,700 entities are bundled with the core game disc, Sporepedia hosts over 140 million . Sturgeon's Law very much applies, but that still leaves over 14 million creations that aren't bad.

The game begins by naming your homeworld, choosing whether your cell will be herbivorous or carnivorous, and a difficulty level, though not necessarily in that order. After that, the gameplay proceeds in five distinct Evolutionary Levels:

The game has had a few spinoff games: Spore Creatures for the Nintendo DS, which uses a 2D creature designer rather than 3D, Spore Origins for mobile phones, which is basically a port of the Cell stage, and Spore Hero, for the Nintendo Wii and (as Spore Hero Arena) DS, which is more of an adventure game than the original, and focuses more on story and the evolution aspects. Another spinoff, Darkspore, was released in April 2011, combining an updated Creature Creator with an action-RPG.

Tropes used in Spore include:
Retrieved from "https://allthetropes.org/w/index.php?title=Spore&oldid=1857599"
Categories:
Cookies help us deliver our services. By using our services, you agree to our use of cookies.