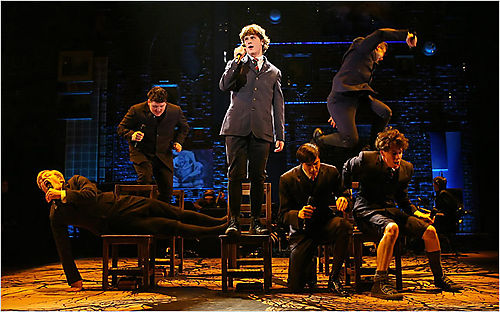 "It's the bitch of living, and sensing God is dead!"

Spring Awakening was originally a play written by Frank Wedekind in 1891, and the Broadway musical based on said play was written in the 21st century. The musical features music by Duncan Sheik and lyrics and book by Steven Sater. The original play was very controversial to audiences of that time period due to explicit sexual content, and didn't have its first production until 1906 in Germany. It wasn't introduced to the United States until 1917, when it premiered in New York City. It was nearly shut down due to it being a "pornographic work." The musical version premiered in New York off-Broadway in May of 2006. It then moved to Broadway in December 2006, and became a sensation much as Rent did in The Nineties. However, its closing date was January 19, 2009, after 888 shows.

The show revolves around a group of teenagers, fourteen in the play, of unspecified age in the musical. Melchior is a rebellious bad boy and proud atheist who hates the authority figures in his life. Moritz is Melchior's nervous wreck of a friend, anxious about his school work and ashamed of his sexual feelings. Wendla is a naive but curious girl who develops feelings for Melchior.

Melchior and Wendla have a sexual encounter (the consent of which is ambiguous), and Wendla becomes pregnant. Whoops. Moritz is disgusted with his sexual feelings, which distract him from his schoolwork, causing him to fail school and disappoint his parents who he can't turn to. He ends up committing suicide. Wendla's mother takes her to have an abortion, which Wendla does not survive. Two characters, Hanschen and Ernst, discover their homosexuality with one another. And, to top it off, two female characters, Martha and Ilse, are sexually and physically abused by their fathers.

In other words, Hilarity Ensues, although Your Mileage May Vary. Many fans will admit the music is better than the story, as the exploration of teenage sexuality and uncertainty might seem like old hat today (keep in mind, though, that the play was a groundbreaking example of modern drama and one of the first to address such issues).

Not to be confused with Catapult Nightmare.

Tropes used in Spring Awakening include:
Retrieved from "https://allthetropes.org/w/index.php?title=Spring_Awakening&oldid=1802254"
Categories:
Cookies help us deliver our services. By using our services, you agree to our use of cookies.