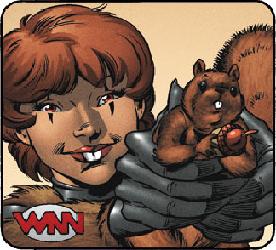 What? The one with with the big tail who talks to squirrels?

Doreen Green is the mutant known as Squirrel Girl -- or, depending on who you ask, either The Anti-Life or The Slayer Of All That Breathes. She is also, believe it or not, Marvel Comics' most powerful hero.

Doreen's (official) powers are enhanced strength, speed, agility, and reflexes, as well as the ability to leap several stories. She possesses small razor sharp claws in place of fingernails, and she's able to use small retractable knuckle spikes. She can communicate with squirrels, which she uses to attack and/or distract her enemies (as well as Breaking the Fourth Wall). She also has a semi-prehensile tail (which she can use to cuddle herself with). Oh, and her lips taste like hazelnuts.

According to her official Marvel powergrid, all of Doreen's stats are through the roof, at the same level as the Living Tribunal.

Squirrel Girl first appeared in a one-shot story in 1992 in Anthology Comic Marvel Super-Heroes Special #8 (Winter, 1991); after explaining her powers to Iron Man, she showed her invincibility by defeating both Iron Man and Dr. Doom. The story was written by Will Murray and drawn by Marvel Comics legend Steve freakin' Ditko. Since the art and plot had a Silver Age touch that didn't take itself seriously, and was it published in the Dark Age that marked The Nineties, the story was notable for how out of place it felt.

Few people actually read the story when it first came out, but after scans of the comic were posted on the Internet, Squirrel Girl slowly became an Internet meme. The fact that Dr. Doom was defeated in such a ridiculous manner, combined with the fact that it was one of the few Doom losses that was never retconned as being Actually a Doombot due to the obscurity and ridiculousness of the story, allowed Squirrel Girl to become a popular Memetic Badass in Internet fight threads -- despite having only appeared once in a story that virtually no one had read. She became an Ascended Meme in 2005, when Dan Slott put her on the Great Lakes Avengers in the Great Lakes Avengers: Misassembled mini-series.

Doreen didn't do anything of real importance during said mini-series other than being cute (and a Naive Newcomer) -- in fact, she faced a low point in her superheroine career by being strangled by a E-List Mook (fortunately, that was just a clever Xanatos Gambit on her part). It wasn't until her next appearance in the GLX-Mas Special that her most defining trait became known: in that special, she defeated MODOK, Terrax, and even Thanos himself, while evidence was presented that proved she had already defeated Giganto and Mandarin. Her next appearances, all in various other comics, strengthened her status as an invincible hero by having her defeat Deadpool ("you evil, evil man!"), Bi-Beast, and Pluto. This culminated in the Deadpool/GLI Summer Fun Spectacular, where Dr. Doom was shown as being completely afraid to confront her, even after she infiltrated Latveria on her own. To be fair, only her victories over Doom, Bi-Beast, Deadpool, and M.O.D.O.K. happened on panel; everything else was off panel. (It should also be noted that after the House of M, Squirrel Girl was one of the few hundred mutants confirmed to have not lost their powers after the Scarlet Witch's breakdown.)

After working with the Great Lakes Avengers for a while, Squirrel Girl came to the conclusion that she was actually holding them back from becoming a great team (because they sat around while she defeated the likes of Fin Fang Foom), so in Marvel's Age of Heroes #3, she announced that she was officially leaving the GLA and striking out on her own.

A short two-page item in I Am An Avenger #1 showed Doreen arriving back in New York City, and (as of New Avengers #7) she is an official Avenger by virtue of being hired as the nanny for Luke Cage's and Jessica Jones' baby girl, Danielle. Since Danielle's been the target of supervillain kidnapping, demonic possession, and other threats in the past, someone like Squirrel Girl was probably necessary to protect the toddler.

Squirrel Girl is best characterized as being a Silver Age character being completely out of place in modern comics; she will frequently break the fourth wall to mention this. The fact that she frequently wins against more powerful enemies using ridiculous means can also be seen as a throwback to the Silver Age.

Doreen is not to be confused with fellow squirrel girls Grace T. Sciuridae and Makoto Nanaya.

Tropes used in Squirrel Girl include:

Retrieved from "https://allthetropes.org/w/index.php?title=Squirrel_Girl&oldid=1846515"
Categories:
Cookies help us deliver our services. By using our services, you agree to our use of cookies.