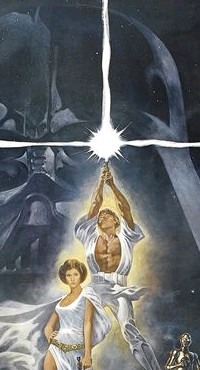 Pictured: The real reason behind the hole in the ozone layer.

This is a standard pose of someone (usually The Hero) raising his one or both of his arms up, holding a sword or other object also straight up. Often done as a Victory Pose or used as a signal by a Screaming Warrior. Sometimes forms part of an Item Get routine, if the item in question is a sword.

This is also common in film posters, because it helps create a cool image. Related to Milking the Giant Cow. See also Sean Connery Is About to Shoot You as well as Leg Cling.

Examples of Stab the Sky include:

Retrieved from "https://allthetropes.org/w/index.php?title=Stab_the_Sky&oldid=1887920"
Categories:
Cookies help us deliver our services. By using our services, you agree to our use of cookies.