Stalker Without a Crush 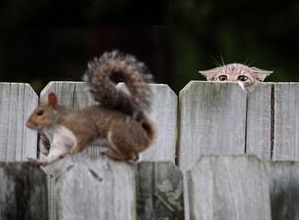 Let's say Alice and Bob are bowlers. Alice is amazing, frequently coming out on top of any league she enters. Bob however... could use some work. No amount of practice seems to help though. He's decided he has to have Alice teach him, by any means necessary. Hanging out in the bowling alley to watch her form was a bust. Directly asking her while she was playing just got him an apathetic "I'm busy". Maybe asking her at the bar would work better. No? How about when she is leaving work. Not that either? Why not see if she is more willing while she's with some friends? Or at home?

Not all stalkers are motivated by sexual or romantic desire. Some are non-romantically obsessed with someone, some want a favor from someone, some just want to stalk someone for the hell of it, or whatever other motive.

Compare and contrast Stalker with a Crush. Contrast because it refers to motives other than having a crush on someone, and compare because it can often resemble that motive for stalking through the "Does This Remind You of Anything?" approach. Also, sometimes a Stalker Without a Crush can develop a crush on whoever they were stalking over time.

Examples of Stalker Without a Crush include: