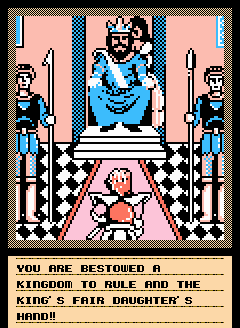 And all the hero had to do was die three hundred times.

The Hero has done it. The dragon/demon/evil wizard/whatever terrorizing the kingdom is slain, and now all he needs to do is head for the palace and collect his reward.

What is his reward you ask? The standard reward package: marriage to the princess (of the hero's choice if there are more than one) and either half or all of the kingdom (depending on whether the sovereign already has a male heir).

While slaying a villain is the most common deed that leads to this specific reward, it is not the only way. As long as the hero has solved a serious enough problem threatening the kingdom, he can get this Standard Hero Reward.

In Fairy Tales, the king would often be reluctant to cough up the reward, particularly if he hadn't realized it would be a Rags to Royalty situation. He would pile Engagement Challenge after Engagement Challenge—and invariably come to a bad end if he didn't give in eventually. The hero may get a free pass if he's already a prince, though.

On the other hand, if the hero has a love whom he is trying to win back to, this can lead to embarrassing But Thou Must! situations.

Sometimes you see the wedding and the hero receiving his kingdom, but it's just enough to know this is the hero's reward.

These days, it's largely a Discredited Trope, due to being horribly clichéd and flying in the face of historical politics (although the princess would have little choice in her husband anyway). But Christopher Booker has plenty to say about the symbolic applications of the treasure, kingdom, and marriage combo, so don't count it out entirely—just set it up a little better maybe.

Do not put examples that are merely offering the Princess's hand, without someone doing something heroic first.

Examples of Standard Hero Reward include:

Retrieved from "https://allthetropes.org/w/index.php?title=Standard_Hero_Reward&oldid=1876786"
Categories:
Cookies help us deliver our services. By using our services, you agree to our use of cookies.