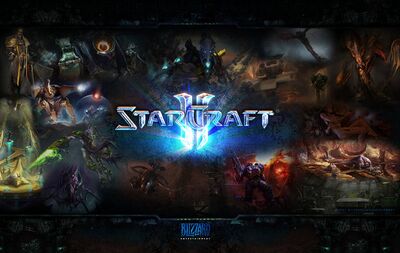 Starcraft II is a Real Time Strategy game by Blizzard Entertainment, and is the long-awaited sequel to StarCraft. Released in three installments, with each one focusing on a different race of the game. The first game of the series, Starcraft II: Wings Of Liberty focuses on the Terran side, while the other two installments (Starcraft II: Heart Of The Swarm and Starcraft II: Legacy Of The Void) focusses on the Zerg and Protoss respectively.

The terran campaign, Wings of Liberty, was released on July 27th, 2010. Set four years after the events of the Brood War, the campaign focuses on rebel hero Jim Raynor and the Raynor's Raiders, and their efforts to take down the corrupt empire called the Terran Dominion. Heart of the Swarm was released on March 12, 2013 and follows Sarah Kerrigan in her effort to regain control of the swarm and exact her revenge on the Terran Dominion's emperor, Arcturus Mengsk. Legacy of the Void' was released on November 10, 2015 and focuses on Artanis, as he reclaims his homeworld of Aiur and reunites the Protoss factions in order to defeat Amon.

Like StarCraft and Brood War previously had, Starcraft II has a prominent competitive scene, complete with professional teams, paid players, tournaments and sponsors. Blizzard caught on to the importance of the progaming scene and built SC2 from the ground up around Competitive Balance while providing extensive first-party global tournament infrastructure. They also regularly solicit feedback from top players regarding the Metagame and act on certain suggestions, resulting in a constantly changing Metagame.

Each game has its own page, as each can be played standalone:

Tropes used in StarCraft II include:
Retrieved from "https://allthetropes.org/w/index.php?title=StarCraft_II&oldid=1905217"
Categories:
Cookies help us deliver our services. By using our services, you agree to our use of cookies.