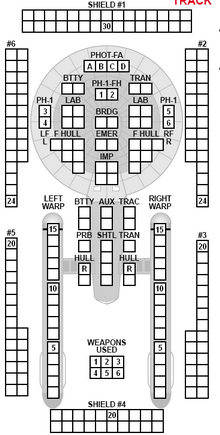 The starships are represented by tokens or miniatures on a hexgrid, and by off-board diagrams showing the systems of each ship and keeping track of how badly damaged they are. Movement is simultaneous; each "turn" is divided into 32 "impulses"; each ship moves on some of these depending on its current speed. Gameplay consists of deciding how to allocate a ship's available energy during a turn (speed, shield reinforcement, weapon arming, etc.) and then carrying out the ships' movement and attacks.

The most common scenario played is a one-on-one dogfight of balanced ships, usually heavy cruisers. Skirmishes between small squadrons are also popular; massive fleet battles are possible but require lots of patience and paperwork.

Due in part to licensing issues and in part to the desired flavor of the game, Star Fleet Battles is based solely on Star Trek: The Original Series, Star Trek: The Animated Series, the Franz Joseph Star Trek Star Fleet Technical Manual (which is where the official SFB licence is tied to) and some other blueprints available in the late 1970s; the movies and later series are not considered Star Fleet Battles-canonical and the two 'verses have diverged considerably.[1] Playable empires in Star Fleet Battles include familiar ones from the aforementioned series and new ones invented by the game's designers: The Federation, Klingons, Romulans, Gorn, Kzinti, Orion Pirates, and Tholians belong to the first group, and from the second group we have the Lyrans, Hydrans, Andromedans, WYN and ISC.

The game has given birth to the greater Starfleet Universe and a number of related games: Federation & Empire, allowing players to fight a strategic war across the known space; Prime Directive, the RPG which started out with its own system, but was later adapted for use with GURPS, D20 System and D20 Modern systems; Starfleet Battle Force, a card based game directly based and homaged to the classic card game Naval Wars; Federation Commander, referred to by all as SFB Light, a simpler system stressing speed and ease of play over detail. And this does not even go into the fact that the base mechanics and most of the background used in the first two Starfleet Command computer games were directly licensed from the Star Fleet Battles system.