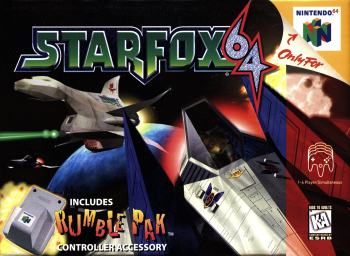 Star Fox 64 was the most successful game in Star FOX franchise, published on the Nintendo 64 in 1997. It was the Continuity Reboot of the Star FOX franchise, which had previously started with Star FOX on Super NES in 1993. 64 recycled and expanded upon many elements of the 1993 game's story.

Star Fox 64 and the 3DS remake provide examples of:
Retrieved from "https://allthetropes.org/w/index.php?title=Star_Fox_64&oldid=1680098"
Categories:
Cookies help us deliver our services. By using our services, you agree to our use of cookies.