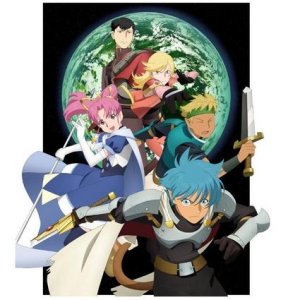 The first game in the Star Ocean series, Star Ocean was originally released for the Super Famicom: that version was never ported to the West, though Fan Translations exist. Square Enix has recently remade this game for the PSP: this remake, subtitled First Departure, was released in the US and UK in October 2008. It tells the tale of a young boy named Roddick Farrence from the planet Roak (most of whose inhabitants have tails and pointed ears, though there are other races) whose world is under threat from a horrible disease that makes those who catch it turn to stone. Seems like standard fantasy fare, until Captain Ronyx J. Kenny and his Number One Ilia Silvestri from the Terran Alliance beam down to the planet to investigate. The stone disease is much more than what it seems, not just for Roak but other planets as well....

Tropes used in Star Ocean 1 include:
Retrieved from "https://allthetropes.org/w/index.php?title=Star_Ocean_1&oldid=1688194"
Categories: