Everything About Fiction You Never Wanted to Know.
< Star Trek
Jump to navigation Jump to search 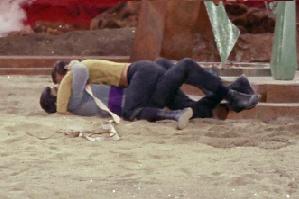 QUARK: So, now that I'm here, is there something you want to say to me?
ODO: Such as?
QUARK: Such as, 'Goodbye, you certainly were a worthy adversary.' Or maybe something with the words mutual respect in it.
ODO: No.
QUARK: No? What do you mean no?
ODO: I mean no. I have nothing I want to say to you.
QUARK: You're telling me that after all these years, after all we've been through, you're not even going to say goodbye to me?
ODO: That's right. Nerys, I'll be on the runabout. Huh.
(Odo leaves)
KIRA: Don't take it hard, Quark.
QUARK: Hard? What are you talking about? That man loves me. Couldn't you see? It was written all over his back.

Picard: Explain all this, or do you simply enjoy seeing me confused and uncertain?
—Q: There is nothing simple about that joy at all, Jean-Luc.

Harry (facing down a mob that wants to beat up Tom}: This man is my friend. Nobody touches him!

Tuvok: Then how will you know how much I enjoy being with you?