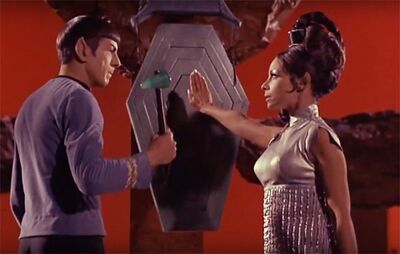 Plans are about to be derailed.

We start off with McCoy catching Kirk on his rounds to talk about how un-Vulcanlike Spock's been, for the past couple of days. Kirk at first dismisses McCoy's worries as being nothing...until another ill-fated attempt by Nurse Chapel to gain his eye causes Spock to throw a temper tantrum, catching everyone by surprise. Unfortunately, the green-blooded primadonna refuses to let in on what's causing him to PMS, only firmly demanding requesting leave on his home planet.

Nothing doing, though; the Enterprise is on its way to represent the Federation at the crowning ceremony for the new ruler of Altair VI, which has been bumped up by a few days - nowhere near enough time for a detour to Vulcan. Spock, however, won't take "no" for an answer, and defies orders to head to Vulcan, anyway, forcing Kirk to order him to McCoy's for a checkup to see just what the hell is wrong with him. And what's wrong, is that his PMS is killing him!

No, I'm not kidding; it turns out that Spock has hit that time of the decade where Vulcans need to mate, lest their suddenly raging hormones kill them. Yeah, I don't get it, either. Kirk, sympathetic, tries to talk to Starfleet about a quick detour to Vulcan, but his refusal to go into Vulcan reproductive habits (why no one in the Federation didn't know about them until now, what with Vulcans being one of the founding members of the organization and all, I have no idea) doesn't convince them. So, like a good, dutiful little captain, Kirk... disobeys orders and heads to Vulcan anyway.

So, par for the course, I guess.

Once at Vulcan, Spock introduces the crew to T'Pring, his wife-to-be, and offers an invitation to both Kirk and McCoy(?) to the wedding ceremony. However, after arriving at Spock's ancestral home, they learn just how in over their heads they are; not only can the bride decide not to marry her intended husband, resulting in a battle to the death with whomever the bride chooses (which Spock conveniently forgets to inform Kirk or McCoy, before the ceremony), but T'Pau, the face of Vulcan, and the only person ever to decline a seat on the Federation council, is overseeing the proceedings. This wouldn't be that much of a problem...had T'Pring not rejected the marriage offer and chosen Kirk as her champion. Naturally, this results in the infamous fight scene between the two friends, ending with Spock seemingly killing Kirk after McCoy gives him something to help fight in the more hostile environment of the planet.

With the shock of killing his best friend acting like a bucket of cold water on the horny Vulcan, Spock orders Kirk's body and McCoy back to the ship while he confronts T'Pring on her choice; turns out, T'Pring hated the idea of marrying for money and fame, and fell in love with a more obscurely-known Vulcan male named Stonn, and arranged everything so that, regardless of the outcome, she'd be able to stay with Stonn (even though, logically, her plan could've been derailed if Kirk either took her as his lover, like the player we know him to be, or, y'know, refused the challenge, as he's informed he could by T'Pau, before he learned of the "battle to the death" thing). Satisfied, Spock leaves the crafty bitch with her lover, and returns to the Enterprise to turn himself in for murder.

But wait! Turns out, Kirk isn't dead! Yes, the substance McCoy gave him during the battle was actually some Applied Phlebotinum which allowed Kirk to simulate death. The episode ends with Spock barely catching himself from having a joygasm over Kirk's survival, and Kirk and McCoy having a good tease over it. Meanwhile, T'Pau covers for Kirk's shenanigans, saving him from another court martial.

Tropes used in Amok Time include: