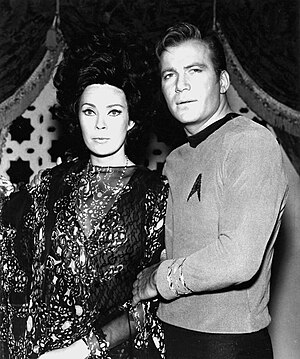 Scotty, Sulu and Ensign Jackson have been beamed down to explore Pyris VII. Only Jackson beams aboard to die and then (yes, in this order) give a prophesy of doom and destruction in an eerie, echoing voice. Kirk, Spock and McCoy beam down to investigate. The place has an eerie, spooky atmosphere and there's a creepy looking castle nearby. The crew goes there in search of their lost crewmates. The interior looks like something out of a Haunted House, complete with dust and cobwebs. And a hissing and spitting black cat. Kirk and company fall through a trap in the floor and land in a dungeon where they're chained to the walls. A zombified Scotty and Sulu release them and they are transported to the sumptuous throne room of Korob the Wizard, who seems very interested in humanity, but doesn't seem very educated on modern (as of Stardate 3018.2) human culture. And there's something about that black cat that keeps hanging around him....

Tropes used in Catspaw include:
Retrieved from "https://allthetropes.org/w/index.php?title=Star_Trek/Recap/S2/E07_Catspaw&oldid=1780742"
Categories: