Everything About Fiction You Never Wanted to Know.
< Star Trek‎ | Recap‎ | S3(Redirected from Star Trek/Recap/S3/E01 Spocks Brain)
Jump to navigation Jump to search 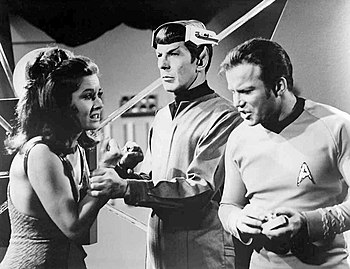 In 1968, NBC wanted to cancel Star Trek after two seasons, but the cult fanbase organized a letter-writing campaign to save the show for a third season. They succeeded and Trek‍'‍s third season began with an episode no one would forget. This it it. The Narm. The Plot Holes. This is that episode. This is "Spock's Brain", widely considered the worst Star Trek episode ever made. Or perhaps the best.

It all begins when the Enterprise encounters an alien spacecraft. Scotty is amazed that they are so advanced as to use ion propulsion, a technology which existed at the time the episode was written (however, as it's clearly an FTL drive, it's the same as today's In Name Only). The spacecraft's only occupant beams onto the bridge of the Enterprise and it turns out to be yet another alien woman who wears Stripperiffic clothes. The men (and Uhura, for some reason) stare as the soundtrack swells with romantic music, as they've clearly never seen a woman like this before. As we will learn later on, she is named Kara. But Kara does not come in peace. Using a wrist band, she knocks out everyone on the ship with that "boing" sound effect which Sufficiently Advanced Aliens always use. After seeming momentarily interested in Kirk's butt, she walks up to the unconscious Spock and gleefully strokes his cranium.

After a commercial break, our heroes awaken to find Spock is no longer on the bridge. McCoy calls Kirk down to Sickbay, where we learn Spock's brain has somehow been surgically removed and he is now on life support. DeForest Kelley struggles valiantly to make the silly things he's saying sound believable, but it doesn't help that McCoy contradicts himself twice in the scene. First he says that Spock's Bizarre Alien Biology helped him survive without a brain, but then he says Spock is more dependant on his "tremendous brain" for life support. As opposed to humans, who can, of course, survive perfectly fine without brains. He also claims to have absolutely no idea how long he can keep the brainless Spock alive, but later he declares out of the blue that they have twenty-four hours. Curiously, this appears to be twenty-four hours from the moment McCoy said it rather than from when Kara actually removed the brain. In a Hilarious in Hindsight moment, Kirk says they'll have to bring Spock along "in search of" his brain.

Anyway, the Enterprise follows the ion trail left by Kara's ship to the Sigma Draconis system[1], but they can't determine which of the system's three class M planets she landed on and none of them seem capable of creating something so advanced as FTL starships. Playing on a hunch, Kirk decides to go with the primitive ice planet. Unsurprisingly, their strategy consists of beaming down to a random spot on the planet and assuming Spock's brain will happen to be nearby. The landing party gets attacked by cavemen and, strangely, the two Red Shirts they brought along don't die. Kirk stuns one of the cavemen and the rest retreat. They question him and he tells them about "the others", who "give pain and delight". However, he doesn't seem to understand words like "women" or "female". Meanwhile, Chekov detects evidence of a buried city and Kirk leads the landing party there, presuming it's where the others live. They find a cave which they conclude is a trap that the others have set for the cavemen. Kirk orders McCoy to beam down and he brings with him a remote-controlled Spock. Yes, Spock's brainless body is now controlled by McCoy with a Handy Remote Control which has all of ten buttons on it. And for some reason, Spock is now sporting the Omicron Ceti III colony outfit he wore back in "This Side Of Paradise". Kirk, McCoy, Scotty, and Spock's body enter the cave to set off the trap. Chekov and the Red Shirts are left to stand guard outside the cave and thus do nothing for the rest of the episode. Who would have guessed that this would be the episode in which two Red Shirts live?

The cave turns into a elevator via a Screen Shake effect and transports our heroes down to an Elaborate Underground Base, which consists of those geometric hallway sets they always use to represent interiors on advanced planets. Waiting for them is another half-naked woman with a wrist band, but Kirk stuns her before she can "boing" them. The soundtrack swells with more romantic music as they interrogate her and she provides inane answers to Kirk's questions. Kirk at first thinks she's Obfuscating Stupidity, but tricorders are apparently Lie Detectors now and Bones says the woman has the mind of a child. This is a bit of an understatement. If you asked most children what this place is, they would come up with something better than "this place is here". Meanwhile, Scotty has managed to pick up Spock's disembodied brain on his communicator and somehow it can talk in Spock's voice without having his vocal cords. Spock's brain tells Kirk that "there is a definite pleasurable experience connected to the hearing of your voice." Les Yay and Ho Yay in the same episode! Who doesn't love Star Trek? Kirk tells Spock's brain that they'll get to it and the disembodied organ quips "A practical idea, Captain. It seems unlikely that I shall be able to get to you."

At this point, Kirk, McCoy, Scotty, and Spock's body are taken prisoner by Kara. They are brought to some kind of conference room with her all-female counsel and their male bodyguards. By now, it has become apparent that the cavemen living on the surface are the "Morg", the women living underground are the "Eymorg", and that the Eymorg enslave the Morg using their wrist bands. How either society can procreate is not explained. Kirk demands Kara returns Spock's brain, but she not only has no memory of taking it, she doesn't even seem know what the word "brain" means. "Brain and brain! What is brain?!" she asks in exasperation, giving us the the episode's most famous line. Kirk asks to speak to their leader. Kara says she is leader, but Scotty and McCoy dismiss this as impossible since they need engineers and doctors. After all, they clearly need men for that. Not to mention engineering and medical skills have absolutely nothing to do with leadership credentials. That's, you know, why Kirk is captain of the Enterprise instead of them. Anyway, they finally get far enough through Kara's beautiful thick skull for her to mention that there is a "Controller". Then Kirk has an epiphany. "Spock's... brain... controls," he says in classic William Shatner fashion. Kara leaves with her counsel, leaving their Morg slaves to guard the prisoners. In stupidity which is for once justified by the plot, the Eymorg have left Kirk, McCoy, and Scotty in the same room as their communicators and tricorders. They take them back after a Fight Scene with the Morg slaves and contact Spock's brain again. Spock's brain beams them a signal which they follow to the Wetware CPU room. Kara happens to be in there for no particular reason and she uses her wrist band to hit them all with an Agony Beam. While writhing in pain, Kirk grabs the remote control, using Spock's unaffected body to overpower Kara and free them. How he manages to make Spock's body do such complicated actions with ten unlabeled buttons is another of the episode's mysteries.

Kara pleads that her people will all die without their new Controller, saying the old one is finished. Apparently considering committing genocide a reasonable price to pay for having his Science Officer back, Kirk refuses to listen and demands to know how she removed Spock's brain. Kara says she used the "old knowledge" from "the Teacher". The Teacher turns out to be Cool Helmet and Kirk forces it onto the head of a protesting Kara. It turns out making a hostile alien smart isn't such a brilliant move and she pulls out a phaser which she had apparently been keeping in Hammerspace since that dress certainly doesn't have pockets. Note how she was smart enough to not leave their phasers with their communicators and tricorders when she was dumb, but only now that she is smart can she figure out how to pull the trigger on the phaser. Rest assured, this turns out to be a Cliffhanger Copout and Kirk gets back the phaser from her rather easily after a commercial break. Kirk and Kara have an argument in which she actually makes better sense, mostly because Kirk never addresses her concerns about her people and instead just keeps repeating that Spock will die. You know, if Spock were in character, his brain might point out at this point that saving him would constitute sacrificing the needs of the many for the needs of the one.

McCoy suggests he could use the Teacher, but Spock's brain warns him that it wasn't made for humans and tells him that he can't take that risk. So apparently Spock is okay with them killing off a whole civilization to save him, but he draws the line at risking Bones' life. McCoy insists it's worth the risk since he could bring the knowledge he will learn to "the world". Yes, he said "world", not "galaxy". Moving on, Kirk lets McCoy do it. It causes him to faint, but it still works and he gasps that "a child could do it!" Naturally, the big mystery of how to remove and restore a brain is going to be resolved with The Un-Reveal. They even have Bones operate behind a partition so that they don't have to explain what he's doing. Oh, and they're doing this operation while in the underground Eymorg complex. How it still has light, oxygen, etc. without the Controller is not explained. Kara is also still there, acting the Neutral Female. She seems mildly annoyed that all her people will die. No, this is not an understatement. Kirks tells her that they won't die and launches in with his Kirk Summation, telling that they'll be better off living on the surface with the Morg. He appears to have just made this up on the spot since what will happen to the Eymorg without their Controller is obviously such a low priority. At least he's not committing genocide anymore, but he's still destroying an entire culture without anyone even mentioning the Prime Directive.

Meanwhile, McCoy is forgetting the knowledge he learned from the Teacher, but Kirk has a brainstorm to save the day. He has McCoy connect Spock's speech center and then Spock freakin' directs his own brain surgery. Yeah, that makes sense. And when did Spock get the Teacher's knowledge anyway? In any case, the operation is successful, however improbably so. By the way, Spock's brain has now been surgically removed and restored without affecting his trademark hairstyle at all. Spock starts to talk about how fascinating the Scavenger World they've just destroyed is and McCoy snarks that he shouldn't have reconnected Spock's mouth. Cue "Everybody Laughs" Ending.

The Fan Nickname for this episode is "The One With... Spock's Brain". It is the only episode of the series to feature a main character's name in the title. It is also, far and away, the episode with the most title drops, to the point that many people have made a Drinking Game out of it. It's not recommended for lightweights.