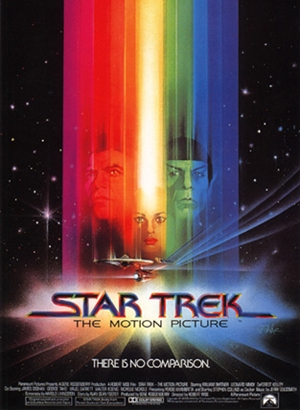 Ten years after the Cancellation of the original Star Trek series, it had been Vindicated By Reruns and so Paramount decided to make The Movie with none other than Robert Wise (director of The Day the Earth Stood Still, West Side Story and The Sound of Music) at the helm. As a side note, the general story is nearly identical to the Original Series episode "The Changeling", with elements from "Obsession" and the Animated Series episode "One Of Our Planets Is Missing" -- and in fact the movie's story was intended to be the pilot of the abandoned Star Trek: Phase II.

The plot sounds simple enough. An unstoppable entity calling itself V'Ger is heading towards Earth, destroying all in its path, and the Enterprise is sent out to investigate. The story was originally written to be 45 minutes, stretched to 2½ hours, most of which involved the bridge crew staring at special effects in awe. Wise's declared intent at the time was to create a 2001: A Space Odyssey for that era.

The novelization of the film is noteworthy for two reasons: it is the only prose Star Trek fiction ever written by series creator Gene Roddenberry, and it contains a footnote explicitly addressing rumors that Kirk and Spock were lovers (it may or may not have cleared that up).

In (funnily enough) 2001, a Director's Cut was released. It is faster paced and actually includes a shot that shows the entirety of V'Ger. It also revealed that the original film was more of a workprint and Wise was not allowed to trim it to a more reasonable length because the suits feared such information would ruin the reputation ahead of time.

Adjusting for inflation, this film has the second-highest budget of any Trek movie (behind only J.J. Abrams' reboot) and the special effects to prove it. A slightly remixed version of the Fanfare Jerry Goldsmith wrote for this film later became the theme music of Star Trek: The Next Generation. Also, the characters of Decker and Ilia, guest characters in the film originally intended as regulars for Phase II, are arguably early versions of Riker and Troi. Willard Decker and William Riker even have similar first names, with "Will" as their nickname.

Tropes used in Star Trek: The Motion Picture include:

Tropes seen in the novelization of Star Trek: The Motion Picture include:

Retrieved from "https://allthetropes.org/w/index.php?title=Star_Trek:_The_Motion_Picture&oldid=1876789"
Categories:
Cookies help us deliver our services. By using our services, you agree to our use of cookies.