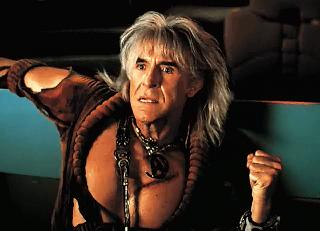 "Beyond the darkness, beyond the human evolution, is Khan."

William Shatner and Ricardo Montalbán fight to see who is the Largest Ham in the galaxy.

You see, the charismatic Khan Noonien Singh of the original series episode "Space Seed" is back. In "Space Seed", Khan, a Human Popsicle from the far-off year of 1996, was awakened and turned out to be a genetically-engineered warlord on the run after his side lost the Eugenics Wars. Kirk thwarted his attempt to hijack the Enterprise, depositing him and his followers on an uninhabited planet.

It's fifteen years later now. Khan escapes his exile with revenge against Kirk as his goal and using a stolen Weapon of Mass Destruction to make good on it. Meanwhile, Kirk has fallen victim to the Peter Principle and is facing a mid-life crisis. It doesn't get any easier for him when a Hot Scientist he once knew turns up and her son says Admiral You Are My Father. Kirk doesn't like to lose, but this time he may only be able to achieve a Pyrrhic Victory. The film's Bittersweet Ending was created with the assumption that Nimoy would be leaving the show for good, but ironically, he liked making this film so much that he wanted to come back, which was the point of the next film.

Star Trek II: The Wrath of Khan is considered by many fans to be the best movie in the series and it's the yardstick against which all other installments are measured. This is largely attributed to the direction of Nicholas Meyer, who had previously penned the best-selling Sherlock Holmes novel The Seven Percent Solution and directed the film Time After Time, as well as the work of Harve Bennet. While Meyer hadn't actually seen the show before, he managed to watch all of the original series's episodes before sitting down to work, concluding that the premise was essentially "Horatio Hornblower IN SPACE!" and did a Retool to emphasize the Space Is an Ocean angle. Some of Harve's work included getting rid of the ridiculous Space Clothes used in the previous movie (which took guts considering the small budget).

Outside the world of Star Trek, Wrath Of Khan is notable for containing two big breaks. Kirstie Alley made her acting debut in this film playing the young Vulcan Saavik, even getting the onscreen credit "and introducing Kirstie Alley". This was also the first major motion picture to be scored by James Horner, who would go on to do The Land Before Time, The Rocketeer, Braveheart, Titanic, and Avatar. As Nicholas Meyer once put it, they hired James Horner to do Star Trek II because they couldn't afford Jerry Goldsmith, but by the time Meyer returned for Star Trek VI: The Undiscovered Country they hired Cliff Eidelman because they couldn't afford James Horner.

While not flawless, it is a rousing (and emotional) adventure movie and is even now considered a great example of a Surprisingly Improved Sequel.

Tropes used in Star Trek II: The Wrath of Khan include:
Retrieved from "https://allthetropes.org/w/index.php?title=Star_Trek_II:_The_Wrath_of_Khan&oldid=1894637"
Categories:
Cookies help us deliver our services. By using our services, you agree to our use of cookies.