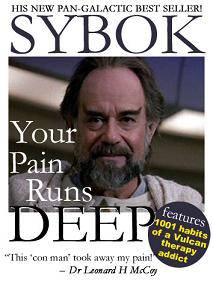 Now for the low, low price of your starship!

"The Enterprise is back. This time, have they gone too far?"
—The film's tagline.

"Why are seat belts being installed in movie theatres this Summer?"
—Paramount teaser ad intended to refer to the movie's fast pace, not to being strapped in and forced to watch the flick.

They've stared at V'Ger, defeated Khan, found Spock and saved the whales. But can the Enterprise crew survive their greatest challenge yet? William Shatner! ...In! ...Thedirectorseat.

With a brand-new Enterprise, Kirk and crew set out to resolve a hostage situation only to discover that they've been suckered as part of a grander scheme. Who's behind it? Why Spock's long-lost half-brother Sybok, of course! Sybok commandeers the Enterprise, winning over most of the crew by using his telepathic Epiphany Therapy on them. Failing to realize that there is No Such Thing as Space Jesus, Sybok makes them set a course for the center of the galaxy, where he believes God is waiting. With the bulk of his crew now working against him, Kirk must John McClane his way up the Enterprise armed with his wits, a pair of rocket boots... and Trek's very first fart joke.

Now it should be noted the movie's failings aren't all Shatner's fault. We can also thank Executive Meddling for all the forced "humor" and the 1988 WGA strike for short-circuiting the screenwriting, and the infamous Special Effect Failure was due to ILM being too busy with other projects to work on the film.

Still, the concept was Shatner's idea, and he knew about the studio's humor requirements before he even began work. Gene Roddenberry himself had expressed strong reservations about the pitch - he had good reason to be concerned, as he had previously written his own story about the crew meeting God and hated the result. But Shatner persisted with the idea of Kirk coming up against God and winning. Star Trek and religious topics have always been uneasy bedfellows; Deep Space Nine is the only series to pull it off, and Trekkies are divided on even that. (Of course, considering that Roddenberry's counterproposal was, as usual, having the Enterprise crew go back to 1963 so Spock could be the second gunman on the grassy knoll, Shatner's idea was still probably the better one.)

This movie isn't a total write-off, though: Star Trek V also features plenty of Character Development scenes between Kirk, Spock, and McCoy (the Book Ends with the three camping are quite enjoyable), an absolutely brilliant backstory scene involving McCoy and his father, and has a collection of well imagined individual sequences such as Coming in Hot with a shuttlecraft.

Tropes used in Star Trek V: The Final Frontier include:

McCoy: I thought men like us don't have families.
Kirk: I was wrong.

Kirk: I could use a shower.
Spock: Yes.