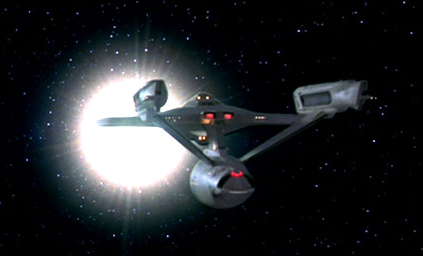 "Second star to the right... and straight on till morning."

A Grand Finale for the classic Trek crew (as played by the original actors, at least) which resolves the previously ongoing conflict between The Federation and the Klingons with a Tom Clancy IN SPACE! storyline. Perhaps due to its political intrigue plot, The Undiscovered Country is Darker and Edgier than its predecessors.

After an environmental calamity, the Klingons' infrastructure collapses and their leader sues for peace. Does This Remind You of the end of the Cold War? It should. The Iron Curtain was coming down at the time of production and the Klingons had always been stand-ins for the Soviets. Kirk, ever the cynical cowboy, still doesn't trust the Klingons, but is volunteered by Spock to escort their leader to the peace talks without asking him first. But Kirk is not the only one who doesn't want peace - a mysterious conspiracy with accomplices from both sides of the conflict means to drive the Federation and Empire into a full-scale war, framing Kirk and McCoy for murder in the process.

Nicholas Meyer, the director of Star Trek II: The Wrath of Khan, returned to the helm for this one. As evidenced by the page quote, the film lacks anything resembling subtlety, but its tongue-in-cheek satire and heavy handed moral is just as good if not better that way. If nothing else, it's considered much better than The Final Frontier. In any case, most fans consider it a worthy send-off for the original cast.

Tropes used in Star Trek VI: The Undiscovered Country include:

Retrieved from "https://allthetropes.org/w/index.php?title=Star_Trek_VI:_The_Undiscovered_Country&oldid=1549563"
Categories:
Cookies help us deliver our services. By using our services, you agree to our use of cookies.