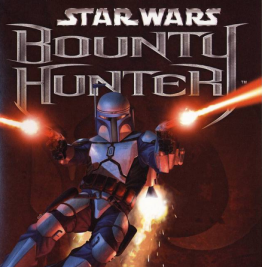 Star Wars: Bounty Hunter is a Star Wars videogame which take place before the events of Attack of the Clones and tells the story of Jango Fett, and how he was chosen as the template for the clone army.

A mysterious cult, the Bando Gora, is wreaking havoc in the galaxy. Its members are distributing a dangerous variation of death sticks, which turn users into mindless devotees. The leader of the cult, the fallen Jedi Komari Vosa has become a threat even to Darth Sidious's plans, so he orders his disciple Darth Tyranus to take care of her. So he decide to hire several bounty hunters, offering a large reward for the head of Vosa. Soon, Jango Fett and his rival Montross start their hunt across the galaxy.

Armed with a large arsenal of weapons, Jango must fight his way in several, difficult levels divided in six chapters. Along the way he can also capture other bounties and find the Mandalorian Golden Feathers to unlock the bonus content.