Everything About Fiction You Never Wanted to Know.
(Redirected from Starfish Character)
Jump to navigation Jump to search 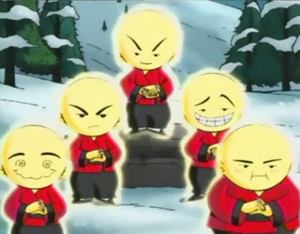 A character gets split into two or more copies of themself, each of which reflects some facet of their personality. This can be similar to Evil Twin, but the split need not be along the good/evil axis. Sometimes seen as part of a Journey to the Center of the Mind. When this is not the case, it's usually an effect of the Applied Phlebotinum of the week.

Often the parts have to work together, as none of them is individually capable of what the original character was. Sometimes, as they spend more time together, they start to become more like each other.

Compare Enemy Without, but the components are not necessarily enemies, and unlike in Enemy Without none has any particular claim on being the "original" version. Also compare Self-Duplication, which is similar in appearance, if nothing else.

Not to be confused with Half the Man He Used To Be.

Examples of Literal Split Personality include:

Retrieved from "https://allthetropes.org/w/index.php?title=Literal_Split_Personality&oldid=1919929"
Categories:
Cookies help us deliver our services. By using our services, you agree to our use of cookies.