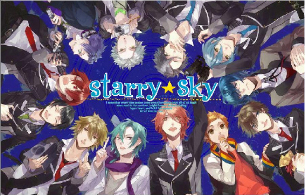 I remember every time season come around precious day all of us laugh
stars read to the our time, bright forever without fading
layer heart, and hold this moment
lot of love for you.

In this game, you are Tsukiko Yahisa (or whichever name you want, actually), the first and only female student to enroll in Seigatsu Academy, an astronomy school. The series features 12 good looking young men (3 per game), each of them representing an astrology sign. So far, four games have been released, each named after a season:

A 5th game, "After Spring", has been announced for August 27, 2010 and will feature the ～in Spring～ cast. An anime adaptation was released on December 23, 2010. There are more planned, one "After X"-game for each season.

Each character has his own Drama CD, which were released throughout the year 2009. Japanese only. There is now a Starry Sky Character sheet which has just been added.

Tropes used in Starry Sky include:

And : "Thank you", I wanted to tell only it. - Capricorn
And : I wonder when you would realize my heart. - Pisces
And : Well... Have I accomplished all to be done. - Aries