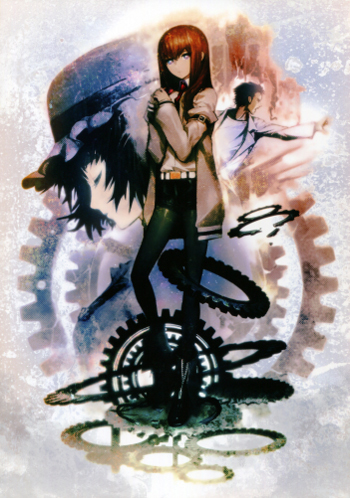 Being a Mad Scientist is awesome. Converting your microwave so that you can send e-mails to the past? Awesome.

Being stalked by a secret organization doing their own Time Travel experiments and dead-set on capturing or eliminating you? Not so awesome.

The Spiritual Successor to Chaos;Head, Steins;Gate is set roughly one year after the events of the previous game, in the Akihabara area. Like most of his friends, Rintaro Okabe loves experimenting, tinkering with different gadgets and inventions. However, he's taken this love so far as to declare himself a Mad Scientist, and prefers to go by the alias Kyouma Hououin. One fateful morning (July 28, 2010, to be precise), he and his ditzy childhood friend Mayuri Shiina discover the body of Kurisu Makise, a celebrated researcher. As they flee the scene, and he texts his buddy Hashida Itaru, everyone around them briefly vanishes... yet nobody else seems to have noticed the incident.

Shortly thereafter, Rintaro and Hashida run into Kurisu, very much alive, and Hashida mentions receiving a text babbling about the discovery one week ago. Investigating further, they realize that by constantly upgrading and customizing their microwave, they've stumbled across the secret of Time Travel... or, at least, sending text messages back in time, which is a starting point, right?

Unfortunately, they're not the only ones interested in time travel. The shadowy organization SERN has been running their own experiments, and thanks to Rintaro's frantic text to Hashida, they've clued in to what Rintaro and his friends have discovered, and are closing in...

Instead of the "delusion trigger" system introduced in Chaos;Head, Steins;Gate uses the similar "phone trigger": whenever somebody calls Rintaro, he can choose whether or not to answer. Text messages include blue hyperlinks that can be selected to reply to the text. The player's choices determine what sort of path the plot takes.

A 24-episode anime adaptation aired starting in the Spring 2011 Anime season. Following the end of the anime's broadcast, a twenty-fifth episode was released straight to video and a theatrical film was announced.

A full fan translation of the game exists: also the same thing which happened to Chaos;Head's translation project is true to this one, the fan translators pulled the patch from their site as JAST expressed interest in localizing the game. The fans are expecting the worst, as the original agreement with Chaos;Head lead to nowhere, resulting in fans losing the patch and hope for a licensed release.

An official English translation was released on Steam in August of 2016.

A Spiritual Successor to Steins;Gate, Robotics;Notes, was released as a game in June 2012, with an anime following later that same year.

Tropes used in Steins;Gate include:
Retrieved from "https://allthetropes.org/w/index.php?title=Steins;Gate&oldid=1827809"
Categories:
Cookies help us deliver our services. By using our services, you agree to our use of cookies.