Everything About Fiction You Never Wanted to Know.
Jump to navigation Jump to search
/wiki/Steve Ditkocreator 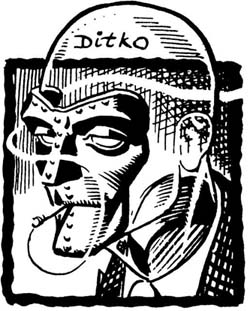 The third creator of the Marvel Universe along with Stan Lee and Jack Kirby, who is most famous for co-creating Spider-Man.

Unlike Kirby, whose work is like a grand symphony of grandiose spectacle and mythic archetypes, Ditko's work at its prime is more like a bluesy soloist, determined to follow his own vision to create his own path. As such, he took to Stan Lee's ideas for deeper characterization much more easily than Kirby did and carved out his own special niche into Marvel.

That means while Ditko was not as dominant in the company's work, his work stood out as something special, such as his original take on Spider-Man being so distinctively him that he was among the first to share official writing credits with Stan Lee on the comic as a plotter. Likewise, his surreal imagery of his Doctor Strange stories have set the tone for the supernatural in the Marvel Universe for decades. In addition, it was his Incredible Hulk stories where the eponymous character first began to change when he is under extreme stress, turning the character from a Jekyll and Hyde copy into the pop culture embodiment of runaway emotion.

Unfortunately, Ditko had a falling-out with Lee, possibly over the revelation of Norman Osborn being Green Goblin (supposedly, the Objectivist Ditko thought that criminals were pathetic losers and that the idea of a supervillain turning out to be a successful businessman was politically offensive); another explanation suggests that Ditko was unwilling to compromise on realism while Lee pushed for a move towards "Marvel time". He defected back to Charlton Comics where he would work on some of his classic secondary creations like designing Captain Atom, revamping the Blue Beetle and creating The Question. Ditko would later move to DC to create characters like The Creeper, Hawk and Dove, and Shade the Changing Man.

Eventually, Ditko's storytelling shifted to push his Ayn Rand influences and interest in Objectivism further into the open. Nowhere is that more obvious but in his Mr. A stories about a Black and White Morality vigilante (a less commercial version of the Question). Alan Moore notably despised this character - the character of Rorschach in Watchmen is a deconstruction and parody of these characters, though some have missed Moore's point, thus resulting the parody becoming a superior interpretation of its intended victim.

Today, his work has slowed down due to its inaccessibility and consistent reports of Ditko being difficult to work with in general. He has become the most famous comic book hermit of the medium, refusing all interviews and photos even while he's getting his due with official credits in the Spider-Man feature films and his DC/Charlton characters getting the spotlight in Justice League Unlimited.

...oh yeah, and he created Squirrel Girl. Make of that what you will.

Retrieved from "https://allthetropes.org/w/index.php?title=Steve_Ditko&oldid=1007968"
Categories:
Cookies help us deliver our services. By using our services, you agree to our use of cookies.