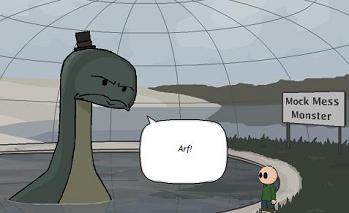 It's... kind of hard to take it seriously.

Ah, Nessie, Nessiteras rhombopteryx, the Loch Ness Monster. Her mysterious allure and continuous camera shyness has led the Loch Ness Monster to inspire many other myths and urban legends of lake dwelling cryptids, as well as having legends of other lakes sneak back into her own. Many lakes around the world have had local stories about the secret monster that lives at the bottom and as the world was getting ready for the moving pictures, a lot of these separate myths consolidated into one shared stock trope about hidden lake creatures waiting to be found by open minded zoologists.

The creature is prone to travelling around the surface like an iceberg with a small section peeping out of the top, often making it cunningly indistinguishable from a log when seen by a Caledonian drunk, while its main body lies hidden beneath the bottom. Explanations often revolve around being some ancient or long lost creature found miles away from where it would be expected, locked in by changes of geography, in an ecology often far too small actually to support it unless it devoted itself to eating once a year and never breeding.

There is also often a plot that goes along with these beasts that decks the halls of Syfy Originals. Some idiot starts the plot by becoming kelpie chow, some low paid fringe scientist, with fewer peer-reviewed papers and far better looks than any normal scientist, will go or be forced out there to investigate alongside a gruff, no-nonsense local and a wacky comedy sidekick, daring to find the truth while being threatened by the locals with group buggery.

A number of myths also have their creatures as helpful or at least sufficiently beautiful to not want to kill, so there's also a softer side to the trope where the creature will be friendly. The myths of Nessie being a Plesiosaur helps play into that being a slightly more friendly looking form that a giant eel or floating turd.

Occassionally, the monster will turn out to have been something completely different.

Is not in any way related to the name of an RPG protagonist.

Examples of Stock Ness Monster include:

Stock and Loch don't rhyme? Well for god's sake then don't tell anyone else.

Retrieved from "https://allthetropes.org/w/index.php?title=Stock_Ness_Monster&oldid=1838640"
Categories:
Cookies help us deliver our services. By using our services, you agree to our use of cookies.