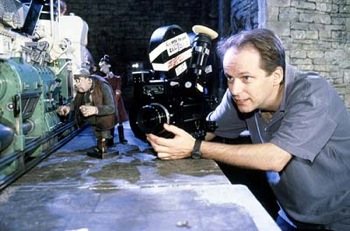 Stop Motion is a technique of animation involving physical models as opposed to drawings or CGI. The models have to be moved for every frame. This sort of thing can take a very long time to film.

The models used can be made of anything, from hard plastic to foam rubber to metal. Rogue independent animator Mike Jittlov has been known to animate anything and everything with Stop Motion, including himself (see his famous shorts Fashionation, The Wizard of Speed and Time and Mouse Mania).

At one time, this was the default method for producing a non-human characters in special effects, along with puppetry. Stop motion characters would be matted into shots along with live actors. Ray Harryhausen was a leading practitioner and innovator of the art; his last stop-motion film was 1981's Clash of the Titans. The technique has been supplanted almost entirely by CGI from the 1980's on.

Stop motion animation can be done on live actors as well—in this case it's called Pixilation. (Not to be confused with Pixellation.) Pixilation can make certain scenes very surrealistic, and can be used to create some cheap special effects (e.g. it can be used to make an actor appear as if he were levitating). In this form, the Scottish-Canadian animator Norman McLaren is generally considered the master, although Jittlov has an immense following here as well.

"Claymation", a trademark owned by Will Vinton Studios Laika for its clay-based animation technique, is one form of stop-motion animation.

Actual "Claymation" is almost never done with earthen clay, which hardens rapidly when exposed to air. Most commonly, a polymer compound like Plasticine is used, since it never dries out and is slow to melt under lights. The figure is usually built on a flexible wire skeleton called an armature, unless the character's nature requires it to be formless.

Some common features to stop-motion figures are an interchangeable mouth, so that lip sync can be done without resculpting the mouth every time, and barely-visible holes or clear pegs in the pupils of the eyes, to make pointing the eyeline easier. On human figures, the mouth is usually a mostly-flat stuck-on piece with a black background to suggest depth. Aardman figures actually have a full set of sculpted mouths.

During the animation process, each character normally has his own "performer"—a technician assigned solely to that figure, who adjusts its movements between frames.

Even though the art itself is painstakingly "low tech" compared to CGI there is some variations on how the final product ends up. Some like to keep true to the original methods in keeping everything in the view of the camera while others like to use digital touch ups for the more complicated subjects like fire, water or flying objects.

Examples of Stop Motion include:

Retrieved from "https://allthetropes.org/w/index.php?title=Stop_Motion&oldid=1785022"
Categories:
Cookies help us deliver our services. By using our services, you agree to our use of cookies.