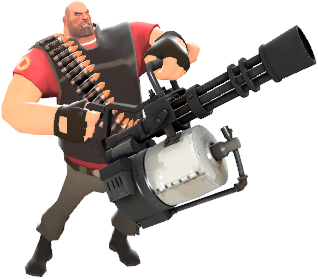 IT IS GOOD DAY TO BE GIANT MAN!

"Careful Fry, he's bulging with what could be muscle!"
—Leela, Futurama

A character is stout, or overweight, or even obese, but quite strong.

The fatter the character is, the more likely this is to be treated as something comic. In more realistic portrayals, the strength will be clear even before the character has to deploy it—he moves differently than a character who is all fat, doesn't get out of breath so easily, etc. You do, however, have to look with care to see it, and the Naive Newcomer may be surprised when he actually uses it. In comic ones, the strength will appear as a total surprise.

Older characters that show this may be described as "going to seed." They probably looked like bodybuilders in their youth, but age, slowing metabolism and the increased levels of body fat that come with it have left them with a thicker layer of insulation over their still-considerable muscle.

Pretty standard for dwarves in fantasy (also, many of the orcs pre-Warcraft, made to differentiate from similar ugly creatures like goblins). Also a fairly common attribute of the Boisterous Bruiser and The Blacksmith.

This is, in fact, Truth in Television. See the Analysis subpage for details.

The trope might also apply to physically strong characters who are merely short, since such people often look fat compared to the very tall (and because, technically speaking, the shorter you are in stature, the less weight you really should carry, making those who break this rule either overweight or freakishly muscular).

Contrast Muscles Are Meaningless, where the muscles aren't merely hidden, but really not there. Often overlaps with Mighty Glacier. The most likely explanation for the Acrofatic.

(Trivia: The "strong" meaning of "Stout" was the original—a "stout warrior", a "stout defence". The "plump" meaning came from the fact that many stout warriors are also stout men.)

Examples of Stout Strength include: