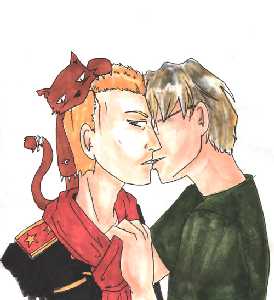 Ocelot did what any reasonable person faced with a mysterious red button in the middle of a weapons research lab would do. He pushed it.

Stray is a Metal Gear Solid Slash Fic by Dahne that centers around a romantic relationship between Otacon and Major Ocelot (also called Adamska within the story). Yes, that's the twenty year old Ocelot from Metal Gear Solid 3. Not surprisingly, the story involves Time Travel. Apart from its unusual pairing and premise, the story is notable for its length (71 chapters plus prologue and epilogue), its multiple plot arcs, its blend of serious character-driven drama and quirky humor, and writing a bit towards the lower-wavelength end of the visible spectrum. And Otacon's adorable in it.

Tropes used in Stray include:
Retrieved from "https://allthetropes.org/w/index.php?title=Stray&oldid=1596343"
Categories: