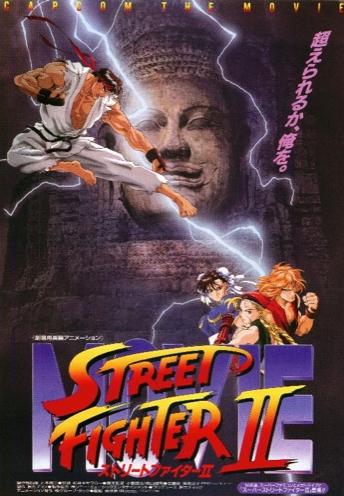 The international criminal organization Shadowlaw is covertly recording fights of the world's top street fighters using human-like Monitor Cyborgs -- the purpose of these recordings is to help Shadowlaw's leader, the vile M. Bison, weed out the best of the best so that Shadowlaw can abduct those fighters and convert them into brainwashed slaves. This was the case for Cammy White, a young fighter who assassinated an English politician while under Shadowlaw's mind control. Similar attacks get the attention of Interpol and their lead investigator, Chun-Li; realizing that Shadowlaw may be after Ryu, a powerful fighter who had beaten ex-champ (and Shadowlaw operative) Sagat, Chun-Li recruits U.S. Air Force Captain Guile to help search for Ryu and bring down Shadowlaw. Both Chun-Li and Guile seek revenge on Bison (Chun-Li for the murder of her father, Guile for the murder of his military partner), but Guile's drive for vengeance makes him initially hard to work with.

Ryu is traveling Asia searching for fights, improving his skills and kicking the ass of criminals he happens to be running into, not knowing the danger he is in due to Shadowlaw's interest in him. In the United States, Ryu's best friend/rival/former training partner -- Ken Masters -- is also searching for fights, but he is unsatisfied with his challengers; Ken wants to fight Ryu again and take care of their "unfinished business", as well as test the limits of his abilities.

Through the use of the Monitor Cyborgs, Shadowlaw has been following Chun-Li, Guile, and Ken; Bison sends the assassin Vega to deal with Chun-Li, while Bison himself kidnaps Ken (who uses the same fighting style as the elusive Ryu) and turns him into another mind-controlled slave. Guile eventually finds Ryu, but at the same time, Bison and Ken find them both -- and while Guile battles Bison, Ken and Ryu have their long-awaited rematch, only with Ken under the control of Shadowlaw...