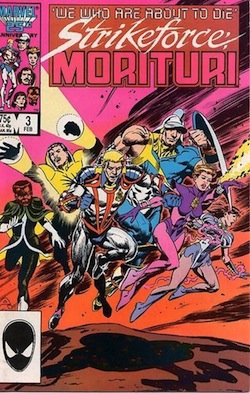 Strikeforce: Morituri was a science-fiction comic book series created by Peter B. Gillis and Brent Anderson. It was published by Marvel Comics from 1986 to 1989.

The series starts off in the year 2072, with Earth suffering under an Alien Invasion by the Horde, a race of barbarian Planet Looters who plunder inhabited worlds for supplies, equipment, technology, and sport. Needless to say, conventional Earth weaponry is all but useless in the face of the Horde's advanced technology.

Despite the dangers, the Paideia world government quickly forms a specialized fast-response team around the Morituri. They also serve as a much-needed inspiration for the besieged populace, and the members are promoted as heroes and celebrities, complete with codenames, cool costumes, and publicity junkets.

The series was noted for its character-driven narrative; much time is spent on the psychological burden of the Morituri, each having accepted certain death to become a champion of Earth, along with ancillary issues like celebrity, leadership, and team conflicts. This is accented by the bleakness of the war itself, as the Morituri are not shown to have a major effect in turning the tide of the Horde invasion.

Peter B. Gillis and Brent Anderson worked on the first twenty issues of the comic, after which it was written by James Hudnall and drawn by Mark Bagley. The series ended after 31 issues, soon followed by a five-part limited series, Electric Undertow; it took place ten years later and served as a cyberpunk-flavored coda to clean up the rushed ending of the regular series.

The title is a reference to the Latin phrase "Morituri te salutamus" (We who are about to die salute you), allegedly said by Roman gladiators to Caesar before battle in the arena.

The Other Wiki has a list of characters here.

Tropes used in Strikeforce: Morituri include:
Retrieved from "https://allthetropes.org/w/index.php?title=Strikeforce:_Morituri&oldid=1390165"
Categories: