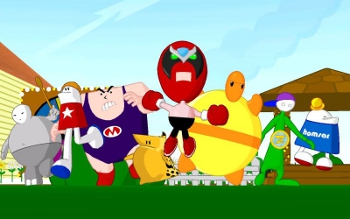 But you can play it, too!

A spin-off of the wildly-popular Flash cartoon series Homestar Runner, Strong Bad's Cool Game for Attractive People (or SBCG4AP for short) is a five-episode adventure game developed by "the people who made that game Rabbit-Dog and Bunnyman" and released on a monthly basis starting in August 2008. Each episode features a different adventure starring Ensemble Darkhorse Strong Bad as he goes about in a typical day of checking e-mails, writing Teen Girl Squad comics, committing arson and petty larceny, perpetrating Zany Schemes, tormenting his neighbors, and playing video games.

Tropes used in Strong Bad's Cool Game for Attractive People include:
Retrieved from "https://allthetropes.org/w/index.php?title=Strong_Bad%27s_Cool_Game_for_Attractive_People&oldid=1699285"
Categories:
Cookies help us deliver our services. By using our services, you agree to our use of cookies.