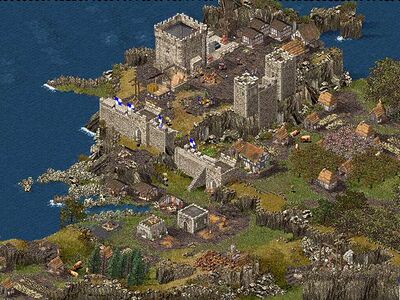 "Greetings, sire ! Your stronghold awaits you !"

A medieval-themed RTS series by British game developer Firefly Studios. It has a heavier emphasis on economy and base building than some other games. Calling it a "castle sim" would probably be the most accurate term for it, since it's possibly the only strategy game where you can build and customize your own castles and fortified settlements any way you like. Its gameplay can be best described as a blend of action-oriented RTS games like Age of Empires and more management-based strategies, such as the Settlers series. The devs from Firefly are the original creators of the City Building Series, and it shows...

Currently, the series consists of these installments :

Despite relatively poor production values and quite crappy AI, the series has a cult following and is notable for bucking many Real Time Strategy gameplay tropes in favor of more realism.

Not to be confused with the early nineties fantasy strategy game of the same name.

Tropes used in Stronghold include:
Retrieved from "https://allthetropes.org/w/index.php?title=Stronghold&oldid=1565612"
Categories: