Stuffed Into the Fridge

Everything About Fiction You Never Wanted to Know.
(Redirected from Stuffed in The Fridge)
Jump to navigation Jump to search 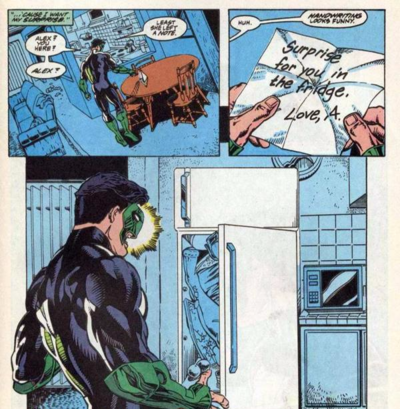 "Well, there goes my appetite."

A character is killed off in a particularly gruesome manner and left to be found just to offend or insult someone, or to cause someone serious anguish. The usual victims are those who matter to the hero, specifically best buddies, love interests, and sidekicks.

The name of the trope comes from a storyline in Green Lantern, in which the minor villain Major Force leaves the corpse of Kyle Rayner's girlfriend, Alexandra DeWitt, literally stuffed into a refrigerator for him to find. Years later, Major Force repeated the gimmick with Kyle's mother in an oven. (It was just a trick with a mannequin that time.)

If the love interest who gets Stuffed Into the Fridge remains relevant to the ongoing story, continuing to be loved and missed by living characters, sometimes to the point of appearing in flashbacks and dream sequences, and is the standard by which any subsequent love interests are measured by, she is also a Lost Lenore.

The term was popularized by comic book writer Gail Simone through her website "Women in Refrigerators." On that site, Simone compiled a list of instances of female comic book characters who were killed off as a plot device. The term came to be used more broadly, over time, to refer to any character who is killed off, abused, raped, incapacitated, de-powered, or brainwashed for the sole purpose of lending impetus to another (usually male) character. Unfortunate Implications may come into play if the killed-off character is female or nonwhite and used to further the journey of a white male character. (Less Egregious if a male white character is killed for the same reason, because a North American work is likely to have a large cast of white males, but a small amount of women or people of color.)

This trope appears in many media. The Throwaway Country is an extreme example, and the Doomed Hometown is in many ways the RPG Video Game equivalent. See also Disposable Woman, I Let Gwen Stacy Die, and Finger in the Mail. Compare What Measure Is a Mook?. If it happens to multiple love interests of the same character, said character likely suffers from the Cartwright Curse.

Compare Collateral Angst, a more general case where bad things happening to Character A are primarily important for their effect on Character B. Contrast Dropped a Bridge on Him, when a relatively important character is killed off just to clear the decks and not for motivational purposes. Not to be confused with being Put on a Bus as a Human Popsicle. Also not related to Fridge Logic, Fridge Horror, or Fridge Brilliance. Or It Came From the Fridge.

Examples of Stuffed Into the Fridge include:

Retrieved from "https://allthetropes.org/w/index.php?title=Stuffed_Into_the_Fridge&oldid=1952543"
Categories:
Cookies help us deliver our services. By using our services, you agree to our use of cookies.