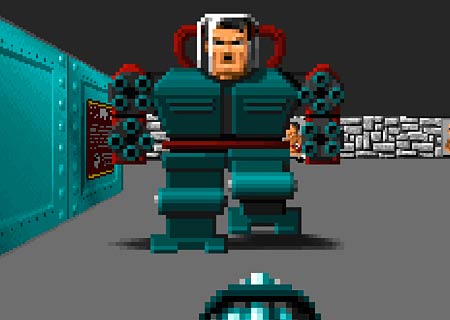 With few exceptions, pretty much everyone agrees that the Nazis were very, very bad, what with the socio-political repression, the institutionalized racialist policies, the wars of aggression against their neighbours, the mass imprisonment and murder of dissidents and undesirables, and forever ruining the reputation of eugenics and social darwinism as serious academic disciplines. So, how do you make Those Wacky Nazis even more intimidating? Why, by giving them power armor and alien allies, of course!

While no such thing would actually happen without serious alterations to the personalities of most of the German high command,[1] there is a bit of a historical precedent. Nazi Germany did achieve numerous technological firsts in warfare, progressed enough in rocketry to kill/injure almost 100,000 British people, and earned a number of German scientists free passports to the US once the war was over (along with immunity from prosecution for various morally dubious wartime activities). Many late-war experimental weapons were actually touted as Wunderwaffen, wonder weapons that would enable the besieged Germans to defeat the Allies or at least earn a negotiated peace.

Despite this reputation for advanced technology, the reality was that most Nazi super-weapons were no more advanced than comparable allied projects and in some cases were actually behind the research curve. The first operational jet aircraft to see action was indeed flown by the Germans, but by 1945 German jet engines lagged far behind allied designs in power output and reliability. The unorthodox "futuristic" German aircraft designs were largely unworkable exercises in theoretical possibilities while more practical ideas, like long-range strategic bombers and aircraft carriers, never got off the drawing boards. This was largely due to political interference. Members of the Nazi High Command were notorious for meddling with weapons programs in ways that largely reduced or eliminated the potential gains. They also tended to continually support the development of offensive weapons over defensive ones, even as their armies were retreating on all fronts, since Nazi Party doctrine didn't allow for "defeatist" thinking. It has been suggested that the real purpose for the so-called Wunderwaffe wasn't to create superweapons at all, but to keep German designers well away from the Russian Front.

Another reason might be that German technology has a (not always deserved) reputation for being effective. The problem is that this effectiveness is usually gained by intricate engineering that increases costs and inhibits mass production. This doctrine plagued almost every weapon system the Germans utilized throughout the war, even the more conventional ones. As an extreme example, the much-vaunted Type XXI submarine was actually inferior to its Japanese equivalent and the U.S./Britain were easily able to equal its performance by relatively simple modifications to their existing designs. German tanks might have been extremely powerful, but Allied tanks were usually far cheaper to build and easier to maintain, an edge Germany couldn't overcome as the war-ravaged industrial base eroded away.

Nonethless, if you have to pick one WWII power to give antigravity and a moonbase, the choice is obvious; after all, it's boring if the good guys have all the toys. Not to mention that Einstein (though a pacifist and a Jew, so hardly on Hitler's Christmas card list) was German (and there are a lot of rumours that the reason why America wanted nuclear power fast is because they thought Nazi Germany would develop it first), and Tesla, although actually Serbo-Croatian (a Slav, so a member of another of Hitler's exterminate-on-sight groups), is frequently confused with this due to the country being part of the Austrian Empire when he was born. Needless to say, the theme is played upon endlessly in pulp callbacks and modern occult works.

Nazi occultism, though often combined with the: Wunderwaffe, superweapon, and V-weapons; was not as strong as people believe. For example, the Thule Society was shut down because the Nazis did not trust their political loyalty.

Contrast Nazis With Gnarly Weapons, which is about the weapons they had in Real Life. See also Ghostapo, where Nazis uses super-demonry rather than (or combined with) super-science; and Soviet Superscience, when it's the Dirty Commies showing up with giant robots and spaceships. Compare Historical Villain Upgrade.

Please do not confuse with Stupid Sexy Flanders. (Oops.)

Examples of Stupid Jetpack Hitler include:

Retrieved from "https://allthetropes.org/w/index.php?title=Stupid_Jetpack_Hitler&oldid=1891491"
Categories:
Cookies help us deliver our services. By using our services, you agree to our use of cookies.