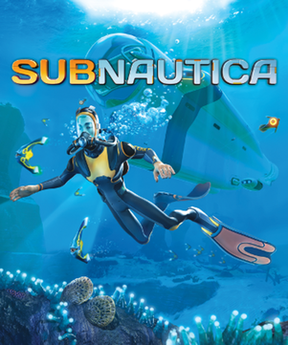 Subnautica is a Wide Open Sandbox Survival Horror game from Unknown Worlds Entertainment, released on Steam in Spring of 2018 after a long (and very popular) beta release. In it you take the role of the nameless survivor of a crashed starship, trying to survive on an alien world that is almost entirely ocean. Stranded on Planet 4546B with almost nothing in your metaphorical pockets and only a badly damaged Escape Pod for shelter, you must scavenge the ocean floor for both salvage and natural resources while ensuring you have food and fresh water to keep you alive. Along the way you learn the history of Planet 4546B both recent and ancient, encounter the remains of a ancient alien research facility... and are infected with a deadly disease.

And then you discover that the ancient alien facility is anything but shut down -- and is enforcing a quarantine of the planet. Violently. Getting off the planet and going home has suddenly become quite a bit harder...

Subnautica is available for both the PC and Xbox.

Subnautica: Below Zero, an expansion/sequel set in Planet 4546B's polar regions, had a beta release in January 2019, and was given a formal release in early 2021.

Tropes used in Subnautica include:
Retrieved from "https://allthetropes.org/w/index.php?title=Subnautica&oldid=1926292"
Categories:
Cookies help us deliver our services. By using our services, you agree to our use of cookies.