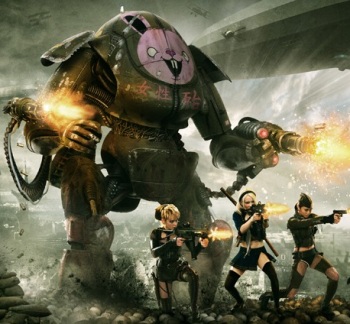 Sucker Punch is an action/fantasy/horror/thriller Feminist Fantasy Sleeper Hit and soon to be Cult Classic, directed, written, produced and conceptualized by Zack Snyder and released by Warner Bros about a young girl's planned escape from an insane asylum and... well, have a look at the tropes. It's highly stylized and highly self-aware, and deals with escapism in all its different forms: referencing practically every movie and video game under the sun, the film is a celebration of the idea that Tropes Are Not Bad and some slight "You are a perverted bastard for looking for tight clothing and wanting the 'Dance' show and seeing the girls as nails and objects and looking for Fan Service / Rule of Sexy which aren't actually there" controversial morals slipped in to Sucker Punch the gentlemen in the audience.

Alternatively, an over-produced, unusually written, sexist, twisted Mind Screw pretending to be about female empowerment, but is really the director's wet dream.

Alternatively, still it's a movie of both biases and depicts all points of view and that's why nobody will win while discussing it.

Special mention goes to the film's soundtrack: the entire score is composed of industrial and modern covers of popular songs (mostly girls singing tracks written by men, while averting The Cover Changes the Gender). These include songs famous for being used in previous films about hallucinations.[1] The result is a very self-referential film, drawing inspiration from every possible genre and adapting them into its own unique atmosphere. Now heading towards Cult Classic status in a latter day discovering of it by people who do actually understand what Zack Snyder is saying....and it's a lot to get your head around the first time: read below!

Ultimately, the film is a modern re-interpretation of Alice in Wonderland, mixing the classic story up with Brazil. ... If it were a video game. ... In slow-motion....

Alternatively, the film can be described as Alice in Wonderland meets 300, with big guns.

Tropes used in Sucker Punch include:
Retrieved from "https://allthetropes.org/w/index.php?title=Sucker_Punch&oldid=1691119"
Categories: