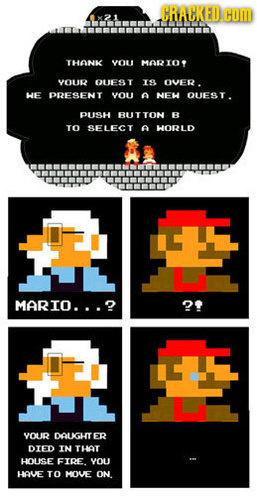 "Imagine that Nintendo made a game where Mario defeats Bowser, and he finds Princess Peach, poisoned, lying on a bed, telling Mario with her last breath that she loves him...and then the game ends. This is sort of devious plot that child psychologists must concoct in order to increase their clientele."
—Hardcore Gaming 101

A Sudden Downer Ending is a series finale in which an otherwise completely upbeat, accessible series ends on an unimaginably bleak note. Can also apply to self-contained movies, books, video games or etcetera with such endings.

Often done because True Art Is Angsty and because Mood Whiplash is an effective way of manipulating your audience, or as a way of adding depth to the main characters at the last moment.

The 3-way baby of Mood Whiplash, Cerebus Syndrome and Downer Ending. See also The End of the World as We Know It, The Bad Guy Wins, Gainax Ending, Cruel Twist Ending, and Kill'Em All. Can be a result of Creator Breakdown. Can result in major Ending Aversion and cries of Ruined FOREVER.

As an Ending Trope, expect spoilers.

If a work was dark or serious to begin with, it does not qualify for this trope and is simply a Downer Ending.

Examples of Sudden Downer Ending include:

Mr. Teeth: It's time to put the donkey into the asshole!

Father Christmas: Glad you could make it again! The party, I mean, not the snowman.

"Well what did ya expect in an opera — a happy ending?"