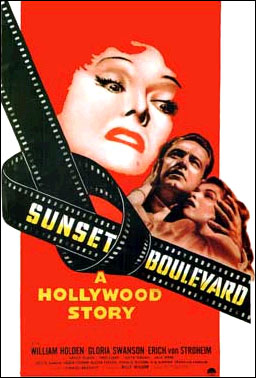 Audiences don’t know somebody sits down and writes a picture . . . they think the actors make it up as they go along.

All right, Mr. DeMille, I'm ready for my close-up.

Billy Wilder's classic Film Noir from 1950, Sunset Boulevard is a dark take on the film industry and the fleeting nature of fame, to this day one of Hollywood's most scorching (and yet wistful) depictions of itself, and indeed one of the greatest films of all time. (In 1998, the American Film Institute ranked it as the twelfth best American film of the twentieth century.) While the characters are deeply flawed, some of them beyond any redemption, the film still presents them each as complex, sympathetic, and even endearing.

In 1993, it was adapted into a musical by Andrew Lloyd Webber. The Broadway premiere starred Glenn Close, and the 1996 Australian premiere in Melbourne showcased a relative unknown named Hugh Jackman, who played Joe Gillis opposite Debra Byrne as Norma Desmond (who, at the time, was ironically Australia's own White Dwarf Starlet). It won the 1995 Tony Award for Best Musical, in a year in which only one other show was even nominated.

Tropes used in Sunset Boulevard include:

"You see, this is my life. It always will be. There's nothing else - just us and the cameras and those wonderful people out there in the dark... All right, Mr. DeMille, I'm ready for my closeup."

Joe: You're Norma Desmond! You used to be in silent pictures; you used to be big!
Norma: I am big. It's the pictures that got small.