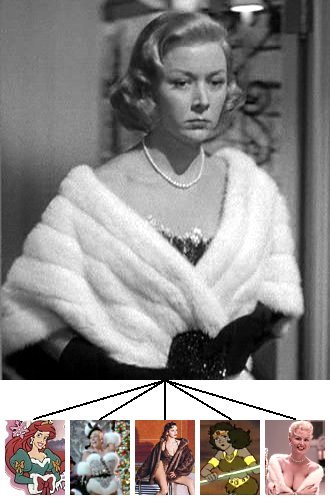 Pretty in Mink is one, with six Sub-Tropes so far (It's Fake Fur, It's Fine not pictured).[1]

Some tropes can be pretty broad in scope, enough to cover one or more Sub-Tropes under them.

Let's say you have tropes for "Scarf Juggling" and "Knife Juggling". Just plain "Juggling" would be the Super-Trope for both of them.

This is also important, as a Missing Supertrope can lead to people thinking a trope is broader than it is.

In logic terms, the Super-Trope would be the genus, and the sub-tropes the differentia.

Do not confuse this with different tropes simply having a common element. That is a standard index. Although a super trope can be an index if it has enough sub tropes.

Not to be confused with The Same but More, Exaggerated Trope, Superhero Tropes.

By the way, have you ever seen Super-Trope and Trope-tan in the same place at the same time?

Retrieved from "https://allthetropes.org/w/index.php?title=Super-Trope&oldid=1616800"
Categories:
Cookies help us deliver our services. By using our services, you agree to our use of cookies.