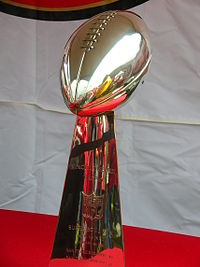 Occurring in late January or early February, it is usually the single most heavily-viewed program in the U.S. for a given year by a very large margin. Anything less than 90 million viewers -- in a country where one-third that is mega-hit territory for a regular show -- is considered a disappointment.[1] As such, advertising time on the Super Bowl is the most expensive; thus, Super Bowl ads are well known for being the most elaborate, expensive, and showy pieces of solicitous short-subject film ever produced, many of which will never be shown again (until they show up on YouTube). It is also the time to introduce new campaigns and slogans (not to mention new products), or to pull out the most elaborate version of an existing series of ads. This tradition of advertising grandeur leads many people to tune in just to watch the ads, even those that might not watch football the rest of the year, a seeming paradox that suits the advertisers just fine. Many non-fans also use the game an an excuse to host parties where copious amounts of food and drink (and sometimes other substances) are consumed.

Also of note is the halftime show, which, since Michael Jackson's 1993 appearance, has featured major acts in popular music in expensive spectacles. Presuming football fans may not be that interested in non-football material, several clever broadcasters have tried to counter-program this portion of the day (the Saturday Night Live specials, WWE's empty arena match, the Lingerie Bowl, the Puppy Bowl, etc.).

The Big Game in American sports, and one that's less prone to Hype Backlash than you might think. The network airing the Super Bowl often takes advantage of the huge audience to debut a new series immediately after the game (The A-Team, Airwolf, The Wonder Years, Homicide: Life on the Street, Family Guy, and American Dad! being among the shows to premiere in this manner). Meanwhile, most other channels put on a No Hoper Repeat. Super Bowl XLVI, which drew an estimated audience of nearly 167 million in the U.S. alone, currently holds the record for the the most-watched TV program ever. Non-Americans, picture what it'd be like if the FIFA World Cup happened every year. And it was only one game. That's the Super Bowl. Another example: The Super Bowl once coincided with U.S. President Ronald Reagan's inauguration. The President re-scheduled.[2] (The NFL has since tried its damnedest to ensure this never happens again, with natural playoff expansion over the years moving the game thankfully for the networks into the February Sweeps period).

It was the target of a terrorist attack in Thomas Harris' book and The Film of the Book Black Sunday, as well as Tom Clancy's The Sum of All Fears, and nearly in reality, too - which is why it's designated as a high profile event meriting additional security by the U.S. government, like the Presidential Inauguration or the State Of The Union Address. A man with an assault rifle thought better of his plan to open fire on the crowd in Arizona and turned himself in in 2008.

By the way, if you're an advertiser or retail store, don't you dare use the term "Super Bowl" without express permission from the NFL.[3]

Although the Super Bowl is not an official holiday, it appears personified as a character in the webcomic Holiday Wars.

The Super Bowl is also known for its extremely expensive tickets, and for being hosted almost exclusively (in the modern era) in southern or western stadia or in domed or roofed facilities. Metlife Stadium in East Rutherford, New Jersey broke that trend by hosting Super Bowl XLVIII in 2014.

Super Bowl is the Trope Namer for:
The Super Bowl provides examples of the following tropes:
Retrieved from "https://allthetropes.org/w/index.php?title=Super_Bowl&oldid=1927309"
Categories:
Cookies help us deliver our services. By using our services, you agree to our use of cookies.