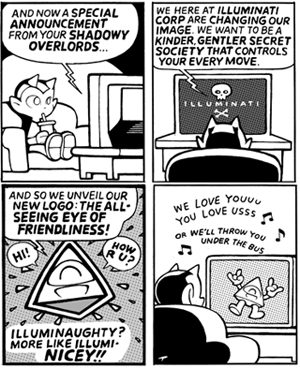 Something, often a company, that is described with an adjective in the title that is entirely at odds with what it actually does. Commonly, something evil will be paired with a nice-sounding adjective. This also applies when the title's implications are opposed to what the company/organization/EvilOverlord does. Basically, when you apply a completely inappropriate adjective to something (often to make it seem better), that's this trope. Look for characters exclaiming "Hey...this isn't happy!" or something similar.

This is a Newspeak trope. There is usually a rather pointed takeaway for the audience about the people doing the naming: a society that uses vicious irony like this is never ever nice or just misunderstood.

For objects of doom that masquerade as harmless objects, see Happy Fun Ball or the more prosaic Artifact of Doom.

Examples of Super Fun Happy Thing of Doom include:

Retrieved from "https://allthetropes.org/w/index.php?title=Super_Fun_Happy_Thing_of_Doom&oldid=1888079"
Categories:
Cookies help us deliver our services. By using our services, you agree to our use of cookies.