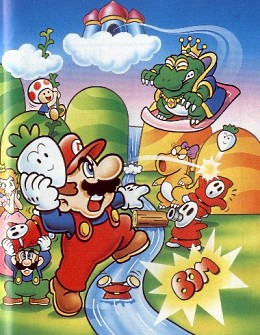 For some reason, Nintendo felt that Super Mario Bros.: The Lost Levels just wouldn't work for American gamers. Perhaps they didn't feel that a Mission Pack Sequel would be accepted in the United States, or maybe they thought it was just too Nintendo Hard.

Either way, they wanted something different. But they didn't have the time to make an entirely new game, so they redid the sprites for an unrelated game, Doki Doki Panic (also produced by Shigeru Miyamoto), to match the Super Mario Bros. characters, and did a few more nips and tucks. The result wasn't quite as radical as Zelda II the Adventure of Link, and for many fans, it's still an excellent part of the series. In addition, the game introduced many of the Mario series' iconic enemies (such as Shy Guys and Bob-ombs) and abilities (such as picking up and carrying items and enemies), and it further developed and differentiated the four main characters (providing Luigi with a taller, lankier appearance, giving Peach her ability to float, and actually codifying Mario as the Jack of All Stats for the first time).

Eventually, this version was released in Japan as Super Mario USA. So, by changing sprites, Nintendo made three titles out of one, and sold the same game to the Japanese twice. This method was used again on the good, but girlishly themed, puzzle game Panel de Pon to make Tetris Attack (which has nothing to do with Tetris) and later Pokémon Puzzle League, selling it with already well-known and popular characters. (And then AGAIN with Planet Puzzle League for the DS, except that one used no characters at all.) Marketing genius or shameless seller? You decide.

Tropes used in Super Mario Bros. 2 include:
Retrieved from "https://allthetropes.org/w/index.php?title=Super_Mario_Bros._2&oldid=1668161"
Categories:
Cookies help us deliver our services. By using our services, you agree to our use of cookies.