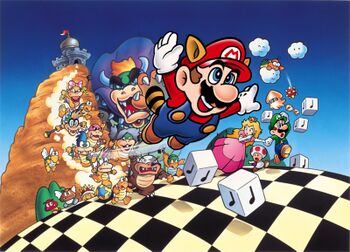 Super Mario Bros. 3 is the third installment in the Super Mario Bros series by Nintendo. The final installment in the trilogy, it featured several new power-ups and features, in addition to a much larger selection of levels, enemies, and so forth (including Bowser's kids). It was a huge commercial success, rivaling the original Super Mario game. SMB 3 was also the first Mario game to have a specific cartoon Spin-Off, in the form of The Adventures of Super Mario Bros. 3. It also received advance publicity from an otherwise non-notable movie called The Wizard (film).

A remake of Super Mario Bros. 3 was later included in the Super Mario All-Stars Compilation Rerelease, and that remake was updated again as a standalone game with e-Reader support as Super Mario Advance 4.

Tropes used in Super Mario Bros. 3 include:
Retrieved from "https://allthetropes.org/w/index.php?title=Super_Mario_Bros._3&oldid=1869650"
Categories:
Cookies help us deliver our services. By using our services, you agree to our use of cookies.